Christie's personality is largely that of a stereotypical business woman. She is often seen talking on her cellphone, if not multiple at the same time, and is usually working while doing so. Aunt Christie is often seen doing a combination of cooking, talking on the phone, emailing and interacting with others, showing an extremely good ability to multitask (even going to the degree of performing certain tasks with her feet to save time, such as opening oven doors and catching things she dropped).

Despite the stereotypically stress-inducing nature of owning and running a small business, Aunt Christie appears to be incredibly level-headed and calm. During Sweet (Truck) Ride, after Blythe is grounded by her father for (supposedly) driving the Sweet Truck down the street, getting a ticket from a police officer and ruining all of the sweets Aunt Christie intended to sell at the Father-Daughter picnic later that day, Aunt Christie does not seem angry at Blythe at all. She accepts her offer to help her re-bake all the treats and even goes so far as to say she was sure Blythe "had a perfectly good reason for driving the truck."

In Blythe's Pet Project, both Aunt Christie and Youngmee show their adoration for the store's lost and found box after Blythe makes an inquiry about Mrs. Twombly's glasses. The duo burst into a fully choreographed musical number about the box and all of its unclaimed contents. 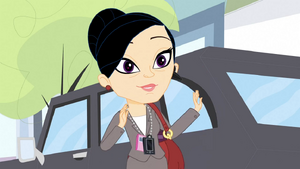