"I was once just like you, pal. But then I saw the light, and I'll never go back to the way I used to be."
—Baa Baa Lou, Secret Cupet

Baa Baa Lou is a pygmy goat who stayed at Littlest Pet Shop in Secret Cupet. He told Russell about his experience with falling in love, from about 5 minutes before.

His name is possibly a reference to the late Desi Arnaz's trademark song Babalu.

On their way to Littlest Pet Shop, Baa Baa Lou and his owner crossed with a woman walking with her pet sow at the park. At first, he did not even notice her, but then he heard the Secret Cupid's music, which made him look at the sow again and fall in love. He dragged his owner just so he could be close to his loved one.

Later at the shop, after munching a bit of the curtains, he introduced himself to the pets and related what happened to Russell, Penny Ling, Minka, Pepper, and Zoe. He was so love-struck that he went jumping around and singing. Russell was annoyed by his silliness, but Minka defended him and Pepper was amused. He then started to dance with Russell against his will. That ultimately encouraged Russell to stop the Secret Cupid.

Before the episode he is featured in aired, a toy of Baa Baa Lou was shown in the announcement of the Franchise Re-Invention, early 2014. 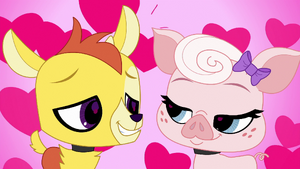