Back Window is the sixteenth episode of the third season of Littlest Pet Shop and the sixty-eighth episode overall.

Russell gets injured and grows bored as he recovers, so he stares out the back window, where he thinks he observes Josh Sharp snatching Blythe's discarded design sketches. 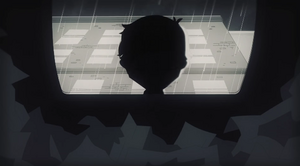 Click here to go on Back Window image gallery