Bad Hair Day is the third episode of the first season of Littlest Pet Shop.

Blythe races to fix the horrendous haircut she gave to Zoe. The other pets try to pressure Minka into becoming a famous artist.

Blythe makes her way into Littlest Pet Shop. She sees a distressed Mrs. Twombly and she asks her what the problem would be. Mrs. Twombly explains to Blythe that today the pets' hair groomer is sick, and today happens to be a very important day. She cannot do the grooming herself because she is not a groomer, so Blythe offers to help and claims to have plenty of experience from grooming her dolls as a younger child. Mrs. Twombly agrees, though she is somewhat concerned.

Mrs. Twombly greets a man who enters the pet shop and asks him questions in hopes of making conversation while he observes everything. He picks through the shop's items while throwing them around carelessly and complaining about how difficult being an art critic is when he suddenly finds a masterpiece on the window. The pets eavesdrop on the conversation between him and Mrs. Twombly, who forgets to mention that Minka made the painting. Almost immediately, the pets begin to swarm Minka and discuss her becoming a famous artist. They all begin to imagine how it would go, such as Zoe being a snobby socialite type, asking Minka how she was inspired to make her painting. Blythe comes in to get Zoe, who is a bit concerned that her usual groomer is out today.

Meanwhile, Russell approaches Minka to convince her to let him be her manager, which is important even if she doesn't think so. She hesitates but is soon to agree, even if it is a bit overwhelming.

Blythe finishes with Zoe and goes on to see how well she has done before staring out of horror as she drops the scissors and the brush she had been using. She cannot understand what happened until remembering her "amazing" doll haircuts, revealing them to actually be horrendous and not at all cute. Zoe grows impatient and asks how she did, but Blythe makes an attempt to cover it up and claims she looks alright. Zoe asks for a mirror so that she can see it for herself but Blythe refuses and attempts to clean all of the cut-off fur that lays on the ground. While doing so, she listens to Zoe explain why she really needed to be groomed today. She is supposed to be going to a very exclusive dog kennel club for a competition.

Russell tries to convince Minka to take this art gimmick more seriously but she'd rather mess with his hair. The other pets grab her and sit down for a "meeting" to discuss names for her official products, and while the original name was "Minka, Inc", Penny wishes for the cuter name "Minka Inka" and everything soon blows out of proportion with everyone arguing over every single aspect. They then push her to the nearby canvas and tell her to start painting since she has a lot more to make if they ever want to get a business going. But instead of painting, Minka goes into a minor meltdown and locks up.

Zoe grows angry that Blythe will not let her see how she looks and when she finally finds a mirror, she approaches it. Blythe makes an attempt to stop her, but misses and Mrs. Twombly comes in to check after hearing all of the commotion going on. Blythe is able to cover Zoe up and claim to be giving her a special spa treatment. Mrs. Twombly leaves the room as Blythe nervously laughs. Blythe resumes apologizing to Zoe for her mistake and she promises to fix it, but Zoe isn't so sure and thinks it would be easier for Blythe to just admit her mistakes. Blythe insists that she can fix it.

The others struggle to figure out what exactly is wrong with Minka when Sunil compares it to a snake facing a mongoose. Vinnie tries to plea with Minka to start painting, while Pepper tries offering some fruit. Nothing works and they make an attempt to ask Blythe for help, but she's in too much of a hurry to notice them. Sunil then points out that because Russell is her agent, he should fix it.

After she locates a bunch of items, Blythe begins to attempt fixing Zoe's fur by puffing up what's left of it, knitting a sweater from the discarded fur (which explodes), and covering Zoe in glue and rolling her around in the fur. Finally she makes a hologram of Zoe's previous appearance, but Zoe realizes it would only work if she didn't move. With nothing left, Blythe has no choice but to come clean and admit what she did.

The other pets resort to throwing toys at Minka, but Penny points out they may have taken things a little overboard. After all, Minka just paints for fun, but they wanted to make money off of it. Russell decides it is probably his fault, and the others agree. Russell apologizes for what he had done. Once he finishes she is quick to accept his apology and they share a friendly embrace. Minka sees Zoe, Blythe, and Zoe's owners and quickly leaves due to an "art emergency".

With Zoe's owners now, Mrs. Twombly explains how Blythe managed to step in to save the day when the usual groomer got sick and couldn't come in. This worries Zoe's owners, but while Blythe speaks, nobody notices Minka sneak up behind her and quickly get to work on Zoe. Blythe makes an attempt to reveal what happened, but when she reveals Zoe everyone is shocked by how pretty and cute she looks. While she wonders how this possibly happened, she notices Minka nearby before Mrs. Twombly asks her if she would like to become the shop's back-up groomer. Blythe refuses, stating she would rather focus on her fashion line. She then goes on to thank Minka while the other pets also ask to be forgiven for earlier. Minka is not angry with them and seems to be over it as Blythe mentions feeling bad, since she did not get into trouble for the problem she incidentally caused. Much to her confusion, Minka claims she will.

At the dog show, Zoe is awarded first place, but when the woman handing out the ribbons goes to pet Zoe, she notices some loose fur and her hand gets stuck. Zoe sneezes and more of the fur flies off. 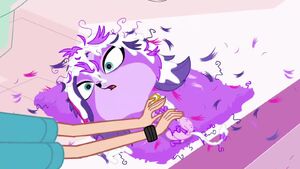