"The winning team will get an extra credit in both our classes, which will lift themselves up by half a grade."
—Robinnia Amster

Bakers and Fakers is the twentieth episode of the first season of Littlest Pet Shop.

Blythe and her best friends enter a cake baking competition. The pets try to stop the Biskit Twins from cheating their way to victory.

Blythe's school is hosting a baking competition in which the grand prize is getting up half a grade in history. Blythe and her best friends decide to enter and march out of the room after class ends while the Biskit Twins try to figure out if they should even bother entering. They count both the upsides and downsides to it, such as getting better grades and their father will reward them, having to actually do work. They cannot decide how to break their tie and when Blythe and her friends come by again, Blythe stops to mention they are coming that way due to class. So with that, the Biskit Twins decide they will just do it, but they will not actually do the work themselves.

At Sweet Delights, the group thinks over everything while they wait for Blythe. Meanwhile, Buttercream reports the news to the others, Vinnie gets paranoid by all of the cake talk, and the twins try to figure out what they want the cake to be. They finish telling the baker what they want made, but their dad catches them and tells them they have to do it themselves. It is then Whittany tells Brittany her idea of sabotaging the other teams.

While at the sweet shop, Youngmee asks to see if they have everything they need to begin baking when two "reporters" comes into the shop. Everyone is able to see it is them though, so they are unsuccessful in stealing the recipe. Or so they think because as they go to leave they find the recipe and cake design on the table and steal them, not knowing Buttercream has been spying on them. She goes to find Russell, Zoe, and Vinnie and after informing them of the news, they quickly hitch a ride with Roger to the school.

At the competition, Blythe's notices the recipe cards are missing, so her friends help search. Buttercream tells the other three pets about the Biskits, so they proceed to drop eggs and cinnamon on the Biskits in order to distract everyone. She falls into the flour, but escapes before the mixing bowl spins it around and after managing to return the cake cards to Blythe, they begin to bake.

After that, the judges taste each cake. One cake is shaped like the Alamo. The second is shaped like the Eiffel Tower. Blythe's is in the shape of the Taj Mahal. The judges and Blythe's team are shocked. The Biskits reveal their cake, which looks like creepy versions of them. As they explain it to the judges, the heads fall off. Borschtberry liquid gushes out of the cake like blood, leaving the other competitors and judges disgusted and frightend. Vinnie stomps on one of the heads and makes off with the other. Blythe's team is therefore declared the winning team. Mr. Biskit looks disappointed in the girls, but then says he's proud of them for trying their best.

Later, at the pet shop, Blythe feeds Russell, Zoe, and Buttercream cake, then asks Vinnie if he would like some. Vinnie declines, for he still had the Biskit Twins' cake head, and took a giant bite. 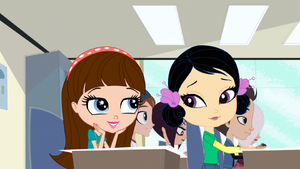 Click here to go on Bakers and Fakers image gallery