Blythe's Big Adventure Part One is the first episode of the first season of Littlest Pet Shop. It is part one of the pilot.

Blythe Baxter embarks on a great adventure when she moves with her father into an apartment above a day camp for pets on the verge of being shut down. There, she not only discovers new friends in a group of pets, but also an ability to speak to and understand them.

Blythe describes her hometown to the viewers in her mind, pointing out that it is not very crowded. She mentions her love of drawing when a Frisbee lands nearby and she gets up to give it to the animals that lost it. Blythe wishes she could speak to the animals and understand them. Her father Roger mentions he has just had a promotion. Blythe is happy about this until he tells them they have to move due to his promotion, which Blythe does not enjoy as much.

Blythe mentions how crowded Downtown City is while her father's pilot career is explained. He feels bad for Blythe, but tries encouraging to give this city a chance. Blythe mentions how much she hates surprises and also scolds him for not talking to her about the move first. When they arrive, they notice there is a pet shop on the bottom floor called Littlest Pet Shop. As Blythe watches the movers, Brittany and Whittany Biskit appear. Blythe describes them as mean girls before she denies their request to hang out with them. This makes the twins angry due to being spoiled and not used to being told no. They leave after informing Blythe that Littlest Pet Shop will go out of business soon.

Inside, Blythe and Roger discuss the Biskit Twins. As Blythe tells her father they seemed pretty mean, Roger mentions he had them in his day and is glad that Blythe is not like that. In her new bedroom, she is busy unpacking while trying to convince herself that this move will be a good thing. She decides to play her guitar in hopes of relaxing, but decides she wants to open her window first. The window will not open, so she rams the neck of her guitar between the frame and tries to open it. This opens the window, but snaps the neck off as she falls back and sees it is really a "dumbwaiter elevator thingy". She investigates and, while she is descending, she sees a spider, which startles her, making her fall down to the main / first floor in a huge cloud of dirty smoke. Miraculously, she is unscathed.

Blythe hears many voices, but seemingly does not notice them until all the smoke vanishes. While trying to understand this, the pets approach and they realize she is responding to them. A shocked Blythe has no idea what is going on, so one of the pets decides she will sing about it and introduce the girl to them. Zoe Trent is the one singing and she introduces her friends: Pepper Clark is a comedian skunk, Vinnie Terrio is a lizard that loves to dance (but he is not very smart), Minka Mark loves art, Sunil Nevla is a very skittish magician, Penny Ling is a ribbon dancing panda, and Russell Ferguson is the most serious pet in the group. After the song ends, Blythe panics and tries to leave, but she accidentally bumps into someone on the way out. This turns out to be Mrs. Twombly, whom Blythe mentions the pets were singing and dancing, but she does not believe her after she looks for herself to see them all playing quietly.

After she mentions that strange things happen sometimes in the shop, Blythe starts to hear a strange purring noise, which is later revealed to be nothing but the air conditioning and, in a fit of panic, she flees the shop. Many people on the streets watch Blythe until she almost runs into a strange little dog, who comments on her crazy behavior before she takes off for home.

Meanwhile, a black vehicle crawls up to the building and a woman named Christie walks inside to speak to Mrs. Twombly about buying the shop to turn it into a sweet shop (introduced later as Sweet Delights) and asks when it will be closing, to which Russell hears the shocking news. Vinnie dramatically says to the other pets that they need just one person who can understand what they are saying to help them out in order to save the shop from closing down. Russell annoyedly agrees, along with the other pets. Penny tries to get them to listen to her after suggesting they ask Blythe for help, but Russell snaps back at her. Finally, he suggests the same thing and all the other pets approve to him, except Penny, who has been saying that the entire time and states to Russell she told him so.

Blythe is woken up by Russell, but she assumes it is her father until she opens her eyes. After screaming in shock again (then apologizing since she keeps calling him a porcupine), she asks why she can suddenly understand pets. Blythe watches as the pets play around in her room, messing everything up. They explain that Littlest Pet Shop is closing and they need her help since she is so far the only human who can understand them. Blythe is momentarily interrupted when she sees how cool Zoe looks with one of her sketchbook pictures. Roger comes to check on her and informs her she has to get to school soon or else she will be late. After Russell points out to Blythe that he and the other pets will have to be shipped to Largest Ever Pet Shop if she cannot save the pet shop from closing, Blythe agrees to help them out.

Blythe is not too sure she can do much to help as Russell tells her she has to save the shop by tomorrow, which means she only has one day left to live in the apartment. She accidentally releases the dumbwaiter rope in shock. The pets crash as the episode ends.

"Now this is an adventure!"
—Blythe
"I think that giant head of hers got the worst of it."
—Vinnie
"Animals are speaking, and I can understand them?"
—Blythe
"I like you. You crazy."
—Benson Detwyler 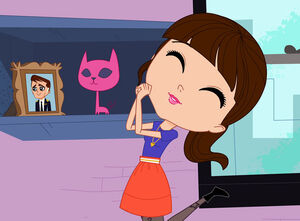