Blythe's Big Adventure Part Two is the second episode of the first season of Littlest Pet Shop. It is part two of the first episode and counts as part of the pilot.

When the pets get Blythe's help to save their beloved pet shop from going out of business, the aspiring fashion designer hosts a pet fashion show starring her new animal friends in hopes of saving the day.

Blythe and her father hurry out of their apartment and quickly head into the car. As they prepare to leave, she distracts him so he does not see the pets trying to get her attention. Upon arrival, Blythe does not see the Biskit Twins spying on her as they exit their limo.

Back at Littlest Pet Shop, the pets are trying to think up ideas on how Blythe can save the shop. Russell tries to get everyone to focus, but they are too busy practicing their talents.

Back at school, Blythe struggles to open her locker. Three classmates approach her and begin to make discussion with her. They offer help with her locker and they go on to discuss the closing of the pet shop due to Largest Ever Pet Shop. Before they have to end the conversation, Blythe's new friends invite her to sit with them at the lunch table. She eagerly accepts the offer. Blythe's new friends see how sad she looks and they ask her about it, to which she explains she promised to save the pet shop and so far, she has not had even one idea on how to do this.

The Biskit Twins come over to Blythe's table and are turned down once again. They toss Blythe's sketchbook to the floor, but not before looking at the drawings and making fun of them. While Blythe's new friends comment on this behavior, Blythe is suddenly inspired to save the pet shop.

After school, the pets have a hallucination about Mrs. Twombly trapping them inside the Largest Ever Pet Shop as she reveals that they were the Biskit Twins in disguise. After the pets' hallucination, they scream in horror until they watch Blythe excitedly tell Mrs. Twombly her idea. The pets cannot really understand them so Zoe tries to overhear them, but she misreads what she is hearing. She tries again and manages to get it right this time, finally learning that Blythe wants to put on a pet fashion show to raise money. Blythe has the pets practice their stage walk and modeling skills. Afterwards, they drive around town putting up flyers for the fashion show to save the pet shop. The Biskit Twins see a flyer and make plans to sabotage the fashion show.

That evening, Mrs. Twombly sees how many people have showed up. Her friends come in to congratulate her, but when they mention money, she sees that every flyer says, "Come Get Free Money." It only takes Blythe a minute to realize who is responsible for this.

The Biskit Twins are revealed to now be in cat disguises, holding buckets of kitty litter and chocolate icing. Whittany reveals their plans: When the show is over and Blythe comes on stage for her applause, they are going to dump the icing and litter all over Blythe and the pets to humiliate her and ruin the show.

Mrs. Twombly goes out to tell the audience there is not any money going to be given away. A lot of them get up to leave while Blythe prepares to send the pets onto the stage. The audience begins to reconsider and they sit and watch as the pets walk down the stage and perform. As this goes on, the Biskit Twins climb up the ladder and onto the top of the stage. Russell notices something and he follows the twins to see what their plans are.

Meanwhile, Mrs. Twombly insists that Blythe goes out to greet the audience, as she is the designer of the outfits. Blythe and the pets all stand together on stage as Russell proceeds to scare the Biskit Twins, making them fall off of the stage and right in front of the audience. Russell releases their buckets, making them run away after everybody laughs at them. Blythe and the pets resume on stage as everybody cheers for them.

The following day, a bunch of customers are in the shop purchasing items and complimenting on how wonderful everything is now. Blythe speaks to Mrs. Twombly, who admits that because of all the sales now, she will need help and she asks Blythe if she would be willing to work there. Blythe eagerly accepts and she speaks to the pets, admitting how happy she was to have met them, accepting her new skills to talk to animals. A man walks over and asks her if she was just talking to the pets, to which Blythe admits she was. The man admits to doing it himself and he leaves the shop while the dog complains due to being too old for baby talk.

The episode ends as her father returns from work, asking, "Did I miss anything?".

Blythe: I've got a surefire idea for saving Littlest Pet Shop.
Zoe: (trying to listen) Blythe said that she's sure to set fire to the pet shop! 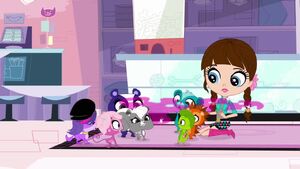