Blythe's Crush is the eighth episode of the first season of Littlest Pet Shop.

Blythe tries to find a boy who dropped his keys in the park with some help from Sunil's "physic abilities", which Sunil himself has little faith in. He assumes Blythe is lost in the city and enlists the other pets, along with a visiting parrot, to help find her.

Blythe and Sue are out skating one day when Sue tries to encourage Blythe to try a little more, after she shows off her one foot skating skills. Blythe is unsure, but forced into it. She begins to do great until she bumps into a really cute boy. He asks if she is okay and they share introductions before he takes off again. Unaware that he dropped his keys, which Blythe picks up and tries to return, only to see he is already gone.

At the Pet Shop, Sunil is practicing his psychic abilities by trying to read cards he cannot see. He does horribly, but takes it as a sign when he manages to get part of a number right. Suddenly, Zoe starts screaming, making him drop all of his cards. She runs in while expressing panic that she lost her beret, unaware it is really on her head. He claims to be busy practicing his powers, which she claims he can use to help her out. Seeing how Zoe is acting, he decides to play along and yanks her beret from the top of her head to show her. When he tries to claim he did not use his abilities to find her hat, Zoe does not listen and reveals to everyone how "amazing" he really is. He tries to tell the truth when Blythe suddenly shows up.

Noticing how clumsy she is behaving, the pets question Blythe. She stumbles over herself trying to say she found a boy's keys and wants to return them, but she doesn't know where he is, where he even lives, or who he is. Zoe suggests they use Sunil's psychic abilities, much to Blythe's amazement. They force him to try, despite his attempts to admit to otherwise. Sunil tries anyhow and manages to see the signs of two streets, Maple and Main. Blythe knows exactly where to go now and she takes off after grabbing Zoe, who wants to come along to see how this ends.

Mrs. Twombly comes inside to show everyone a pet that will be joining them today, a bird who claims to be famous and well known all over the world. He introduces himself before he tells the story of his life, using the pets to demonstrate specfic points in the story. As he finishes, a jealous Vinnie watches as everyone begins to dance with him and compliment on how cool he is.

Meanwhile, Blythe manages to track the mystery boy down. However, it turns out it is another boy. When Blythe mentions the boy she was looking for has the same jacket, the boy points out that everyone in his skateboard crew wears one. When she mentions the scar on his cheek, the boy knows who she is talking about. The entire time Blythe continues to stubbornly deny her crush on him. Before the boy leaves, he points out that besides skateboarding, Josh loves to read. So they decide to go to the library.

At the pet shop, everyone asks to hear more about Esteban's brave adventures. Vinnie finds out it is totally fake. He confronts the boasterous parrot about this and he goes to tell everyone about it. However, before he can, Sunil runs over and claims Blythe is in trouble. He worries he may have sent her to the wrong place and everyone relies on Sunil to find Blythe. He starts to see a big lion statue and everyone fears it is a real lion. Esteban mentions lions are at the zoo, so everyone heads that way to see if Blythe is there.

At the library, Blythe sees Josh go inside, so she pulls her scooter over and brings Zoe inside to try to find him. Seeing as no animals are allowed, she makes Zoe hide in her purse before she curiously tries to find Josh. Zoe points Josh out to Blythe and as she turns to speak to him, he gets up and leaves. They find him heading into the male bathroom and as Blythe waits, Zoe begins to whine about being thirsty and begs for a drink. While waiting, Blythe quickly gets her a drink, but misses Josh. She runs outside to see him getting on a bus and trails behind him on her scooter.

At the zoo, the pets try to go inside in an attempt to find the lion with Blythe when Esteban notices a sign forbidding them to go inside. Then Sunil gets another of his psychic visions, but it is just a bowl. Everyone assumes it is an ice cream bowl and they head to Scooptastic, Blythe's favorite ice cream place.

Blythe sees Josh get off at the indoor skating park and she trails him inside, trying to locate him. Before she can get a word in edge-wise, she struggles to keep up with him. Zoe suggests Blythe skateboard after him and Blythe is convinced it is not very different from rollerskating. She asks a girl nearby to borrow her skateboard before she tries to follow him. She manages to do surprisingly well, but no matter what, she cannot keep up with him and manages to slam into one of the skateboard walls.

At Scooptastic, the pets do not see Blythe anywhere nearby. But before they resume, Sunil begins to scold himself about his mistakes while the other pets gorge themselves on ice cream until they are all chased away.

By the time she recovers, Blythe finds Josh leaving again. She and Zoe quickly trail on her scooter again while Zoe suggests they just call it a day. However, Blythe refuses, claiming she did not go through all of that for nothing. She then stubbornly claims not to be in love again by the time she sees him skate into the park nearby.

Meanwhile, the pets are running all over the place trying to locate Blythe when Sunil gets an idea and tells them to turn around.

Back at the park, they see Josh performing on the stage with his band. This inspires Zoe with an idea and she forces herself on stage and starts singing in hopes of getting Blythe to be honest with her feelings, despite the fact she just sounds like a normal dog barking to everyone else. Blythe manages to return the keys to Josh and he takes his guitar off and hugs her. When she almost falls off stage, she is carried by the crowd. Josh joins and they share the excitement together.

Sunil leads everyone to the park just as the park visitors are leaving. It is almost like a giant stampede and the pets fear being smooshed by the people. Vinnie calls Esteban out on this and claims it to be his fault their in this mess when the parrot suddenly gets an idea and he manages to save everyone.

Zoe shares her happiness over a job well done with Blythe, then asks about Josh. Blythe explains what happened and the hug, but then mentions she thinks they may have lost him for good this time. As they leave the park, Zoe comments she believes they will see him again someday. While they leave, Sunil sadly comments on how he got everyone into trouble all day. However, Esteban convinces him to just have faith in himself and tells him to try again. In hopes of helping himself, Sunil asks everyone else to try to close their eyes and concentrate, too. While they do this, he just happens to see Blythe and he points her out. They call for Blythe and all come down out of the tree. They then explain that Sunil used his abilities to find her.

As Esteban goes to help Vinnie, he admits to never being a great hero, but asks Vinnie not to tell anyone as he only has his stories to go on. Vinnie then admits that he actually admires Esteban for saving everyone, and that even if his stories are fake, he is a brave parrot. Hearing this, he starts to tell another story until Vinnie tells him not to start.

Sunil admits to Blythe that he didn't use psychic skills to find her; he just happened to see her. He admits he probably is not a very good psychic, but Blythe doesn't believe that. She claims he is an amazing psychic and happens to point out that Josh is indeed at Main and Maple. He was right, just a little off in timing.

Sunil: (sees hat) Are you serious?
Zoe: As a deer tick.
Sunil: Riiight...Look, Zoe, I'm really busy right now practicing my psychic powers-
Zoe: That's it! Sunil, you can use your psychic powers to help me find my beret!

Sunil: I am not being pink'd or punk'd or whatever it is, am I?
Esteban: Ha ha, Danger is my middle nombre! Danger is also my last name, and my nickname!
Vinnie: So, your friends call you Estaban Danger Danger Danger? 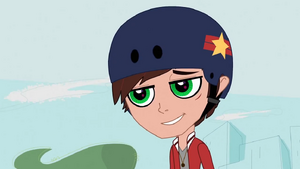