Blythe meets Shivers on the way to search for Mrs. Twombly's missing glasses. Blythe and the pets soon realize who may be the blame for the missing items from the day camp.

One day, while Blythe is grooming Pepper, Mrs. Twombly comes by complaining of the doors and walls after she comments on how nice the day is. While she opens the door, a bunch of insects, ducks, birds, mice, and a squirrel runs into the pet shop. Blythe manages to get rid of them all, but Mrs. Twombly gets scared when Blythe points out there is a bird on her head.

Later, Mrs. Twombly realizes her glasses have gone missing. She thinks she will be fine without them though and struggles to work properly. Blythe comes by to ask her if she lost her glasses and makes some suggestions of where they could be. But when Blythe checks she is unable to locate them. Mrs. Twombly claims she will be fine, but Blythe does not think so and she goes on to check in the dumpster to make sure they didn't fall in.

While doing so the squirrel returns. He asks her about a piece of old food she tossed aside and is surprised to learn that Blythe can understand them. He then explains that he is simply looking around and happens to find a pink ball of fur belonging to a cat. He offers it to Blythe and when she turns it down, he claims he has more uses for it anyway. As he complains of the cold weather, Blythe decides to name him Shivers and returns inside. She tells Mrs. Twombly she was unable to find them and asks her when she last had them. She then runs over to check Sweet Delights and Shivers gives chase, but is unable to get inside.

In the shop, she asks Youngmee if she saw Mrs. Twombly's glasses anywhere. She then tells Aunt Christie and they reveal a Lost and Found Box. They look through it, but are unable to find the glasses. Blythe returns to tell Mrs. Twombly about what happened, unaware that Shivers held onto her hair and snuck in. He heads into the playroom and greets all of the pets and introduces himself, explaining to them that Blythe named him. He claims to be her pet squirrel, but Russell finds it suspicious since he was never mentioned.

Eventually, everyone finds themselves annoyed with Shivers' rude behavior. He steals their food, takes forever with the water, takes their sleeping items, and even their toothbrushes. Blythe comes in to ask why Shivers is there and explains she met him outside. She thinks he seems nice though, unaware of how troublesome he is. They head back into the main room while the pets discuss the missing glasses. They start to think that Shivers may have taken them and are more suspicious when they notice their other items are gone. Things only begin to worsen as the pets all start to turn on each other and argue. However, Russell and Pepper are able to calm them down.

In the main room, Shivers continues to sneak around while Blythe cleans. She is worried she may not be all right to go out by herself without her glasses, but she insists she can do it. Blythe sends Shivers back into the playroom, but the others try to put blame on him and give her their proof. However, Blythe refuses to hear it until seeing he is gone. Zoe uses her canine smelling to find Shivers and Pepper confronts him. She points out where he was hiding, but he denies it. They keep confronting them and he continues to deny he did it until all of their items begin to fall out of the hiding spot. Even now, Blythe is getting angry, so he admits he was not really stealing; he was just gathering the items and denies he has a problem until he realizes he cannot keep track of everything he has taken. With that, he asks for help and Blythe goes up to check. However, she does not find the glasses either, making everyone get angry with Shivers again. As Blythe angrily walks him back to the park, she explains that she thinks he would be much happier there. Shivers is not all that happy, but decides to give it a try.

Back at the pet shop, the pets are turning all of the missing items back into the play room. They begin to think Shivers was perhaps not all that bad until find him back in there ready to steal the book they were taking out of his hiding spot. They call for Blythe and she walks him back to the park.

There, she tells him to watch the other squirrels, thinking it would make him realize what he has to do. He claims to know how to do it, but still does not sound all that happy. Though he does promise to behave – only for her to find that no matter how many times she brings him back to the park, he returns.

Pepper then yells at him and seeing how sad he looks, Blythe offers to help him find a home. He reveals to them he actually does have a home at the park and shows them. Pepper goes inside to look and see that its full of items too. It is so full that it has become infamous among the other squirrels, who are brought by for tours. They also take pictures and quickly leave.

Over at Sweet Delights, Youngmee has just finished helping a customer. Mrs. Twombly comes by and begins to speak to a woman she thought was Blythe and Russell.

Back at the park, Blythe grabs a garbage can and tells Shivers they need to throw out the items. He does not need it. But Shivers claims he does need it for winter. However, none of the excuses work and Blythe begins to toss the items into the garbage. Shivers feels upset and Pepper reveals that he really isn't a thief, he just can't help himself, and somehow this makes shivers feel a lot better.

When they finish, Blythe ends up getting stuck while checking for anymore items inside the main hole. Seeing this, Shivers runs through the top hole of the tree and begins to push her while Pepper pulls on Blythe's legs. They get her out and repair the hole before putting Shivers back inside. He is very happy with his clean, new home and begins to cry tears of happiness. He admits he could not even recognize it and is so happy that he cannot help but thank Blythe and Pepper for their help.

The two return to the pet shop to find that Mrs. Twombly is back and with her glasses, which had been found in her purse in a huge pile of acorns. She also managed to pass her drivers test and tells Blythe that she should have called for a ride.

Pepper: Do you sometimes forget you're a dog?
Zoe: I do, actually.

Blythe: What the what?!
Shivers: The think is, squirrel aren't good at keeping promises. 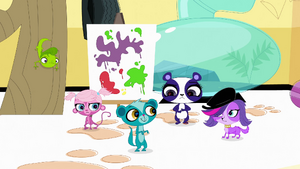