Blythe Baxter is the main protagonist of Littlest Pet Shop. She has the uncanny ability to speak to and understand animals.

Blythe Baxter was based on the Blythe fashion dolls, who was created in 1972 and owned by Hasbro since 1991.

Blythe moved to a flat that is close to Littlest Pet Shop, a pet shop that is going out of business. Soon, she meets Brittany and Whittany Biskit, who say her clothes are lame and ask if she wants them to buy new clothes for her. But, she declines, telling them that she has a lot of unpacking to do, making them both get upset. After they leave, Blythe finds a dumbwaiter behind a painting which she uses and goes down to the Littlest Pet Shop. When she uses it for the first time, she accidentally bumps her head, though she is not hurt. She meets all seven pets and, after hearing Zoe Trent's song, thinks the shop is haunted, so she takes off screaming. Later, when Blythe meets a dog, he speaks to her, commenting on her crazy behaviour. She becomes so frightened she runs back to the flat.

Blythe was not sure why she could talk to animals all of a sudden. Later, when she speaks to the pets, they explain that the Pet Shop is closing and they need her help since she is the only human so far who can understand them. Blythe is momentarily interrupted when she sees how cool Zoe looks with one of her sketchbook pictures.

After Russell points out to Blythe that he and the other pets will have to be shipped to Largest Ever Pet Shop if she cannot save the pet shop from closing, Blythe agrees to help them out.

Wanting to take revenge for Blythe telling them no, Brittany and Whittany have a plan to humiliate her while she has a plan to avoid closing the Littlest Pet Shop by having a fashion show. As they dress up as cats, Jasper told Blythe that all the posters said "come and get free money" Mrs.Twombly said there is no free money. The audience is about to leave, but the fashion show begins, prompting them to watch. After it ends, Blythe is supposed to take a bow, but Russell discovers the Biskit Twins' plot. Then he scares them and the Biskit Twins embarrass themselves before running away. The next day, Mrs. Twombly has a sale for a very special pet fashion clothing line named Blythe Style. Blythe is happy that the Littlest Pet Shop is not closing after all.

In The Tortoise and the Heir, it is revealed that Blythe's mother was Lauren Baxter, a woman with the ability to talk to pets who it can be assumed Blythe inherited her ability from. Series creator Julie McNally Cahill revealed that her mother died when Blythe was very young.

While she cares a great deal about her physical appearance, Blythe is not arrogant or rude and does not like it when others act in such a way as the Biskit Twins did when they first met her. While normally calm and cool-headed, she can be easily frustrated. Because of this, while she may try to be nice to people who annoy her (the Biskit Twins for example), she usually keeps a sarcastic front when speaking to them.

Initially, she thought talking to animals was weird and was even afraid of it until she realized she could use it to save Littlest Pet Shop. Since then, she has been using her ability to help her new best friends in and outside of the pet shop. She is also a decent school student and is always willing to help anyone she knows in times of need. While she seems to be the "sane" one in the entire group of people she knows, she has her own moments of questionable behavior.

Blythe is extremely camera-shy and apparently has been like this since early childhood. She also tends to stress out easily and get flustered. She is shy about her feelings for Josh Sharp.

"Fashion is Blythe's passion. Now that she's starting her new life in Downtown City and at Littlest Pet Shop, Blythe gets to design clothes for a whole new set of friends: a Cavalier King Charles Spaniel dog, monkey, panda, skunk, hedgehog, gecko and a mongoose! Blythe isn't sure how or why she can suddenly talk to animals, but now that she can, she couldn't imagine her life any other way!"

Blythe is a fair-skinned pre-teen girl with bright blue eyes and long, waist-length brown hair with straight cut bangs at her eyebrows. Usually, she will wear her hair in multiple styles ranging from a ponytail, braids or simply worn down with a cute accessory. Her lips are a peachy-pink color.

Due to her fashion talent, she often sports a new style every time she appears. The outfit she is seen in most consists of a blue top and multi-layer peach-pink skirt with a black belt and layer of deep blue lining. She also had a gold necklace, a peach head band with designs on it, black shoes, and black pantyhose with stars sewn on it. Her sketchbook / notebook of fashion designs is labelled "Blythe Style."

For bedtime, she wears a dark purple tank top and a pair of white pajama trousers with a purple polka-dot print and a red bow. In the pilot episode, her tank top has a heart at the center. 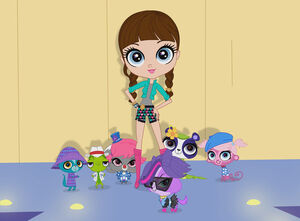