Bob is one of Pepper's idols, to whom she wishes she could tell jokes. He was one of the judges at Downtown City High for a student comedy show. He met Blythe after her performance and told her she was not good at stand-up comedy, but she was funny. 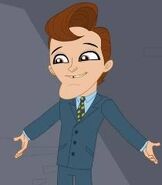 Retrieved from "https://lps2012.fandom.com/wiki/Bob_Flemingheimer?oldid=66577"
Community content is available under CC-BY-SA unless otherwise noted.