"Vinnie: We could just, you know, ask Scout what she's doing.
Zoe: Or we could just let our imaginations run wild."
—Vinnie Terrio and Zoe Trent

Books and Covers is the eleventh episode of the first season of Littlest Pet Shop.

The pets' imagination goes to their heads when they suspect a Siamese cat is a spy targeting Mrs. Twombly. At school, Blythe takes a big risk in recruiting the Biskit Twins to her Mathlete team after seeing their unusual calculation skills.

A frazzled Blythe is quickly going over her math while feeding the pets one morning before school. She is clearly not "all there" and messes up, having given Zoe and Vinnie's food to each other. She switches them around while Russell states she has been going over her math since the previous night and she probably did not sleep the entire time. As Blythe rushes out the door, Mrs. Twombly tries to speak to her about some rumor that pets are being used by the government as spies, much to the pets' shock. This makes everyone grow paranoid as some strange guy comes in. He drops off a pet named Scout and they curiously watch, noticing how strange Mrs. Twombly then acted and after she leaves the room, the Siamese cat leaps out of her crate and starts ripping up a price tag while hissing at the other pets.

At school, Blythe, Youngmee, and a boy classmate are heading towards the Mathlete's meeting location when they see the Biskit Twins inside the room. The teacher, who also does the mathlete leadership, explains that the twins are there for texting during her class, so they have a weeks detention. So they begin their equations. As Blythe struggles, she notices the twins quickly get through the problems with ease. She points this out to Youngmee before their male teammate is sent to the nurses office for a minor meltdown related to too much stress on the brain.

The teacher announces they will have to cancel the match that day when Blythe suggests that they just get the twins to help them. The teacher does not believe her, even claiming to have tests to prove it. So Blythe reveals this to Youngmee and they decide they have to recruite the twins onto their team.

Back at Littlest Pet Shop, they continue to watch Scout as she shreds more papers. They notice she is staring at Mrs. Twombly a lot and end up letting their imagintation get the better of them. They try to get Scout to tell them why she keeps watching Mrs. Twombly, but it is no use. She remains wordless and says nothing. Russell thinks he knows what Scout's deal is. He thinks she plans to attack Mrs. Twombly so she will be afraid of pets and close down the pet shop and assumes she must be working for Largest Ever Pet Shop. As they hide, they hear a low, strange sound and assume it to be a spy gadget. They make the idea to have Zoe keep Scout busy. While she does this, Vinnie will go ahead and try to locate whatever strange device she has on hand.

No matter how hard they try, Scout does not move an inch until Vinnie finally ticks her off and she attacks him for harassing her.

Back at school, Blythe follows the twins, trying to get them to join her and Youngmee. They ask what they would get out of it and initially refuse. Blythe forces herself to admit they may actually be really smart and she explains that they heard them speaking weirdly to each other. Brittany reveals they do this to keep their conversations private but Blythe claims it still solved the problems and they really need help. They then decide to join but only if Blythe follows their two conditions. She has to stop calling them geniuses, and they have to get them out of detention.

The pets resume spying on Scout when Mrs. Twombly announces it is snack time. Scout suddely seems a bit more excited now, which makes the pets worry. Everytime she tries to get to Mrs. Twombly the pets keep distracting her. But before she can reach her, Mrs. Twombly recieves a call and leaves the room.

Blythe is finishing her speech on why their teacher should take the twins out of detention. She suggests that first of all, Blythe should join the debate team. She then suggests that the twins may be lying to Blythe just to be let out of detention and refuses. To challange her, Blythe promises they are indeed math geniuses. She then offers to serve their eight days of detention if she is wrong. Once the teacher sees how serious she is, she allows it and Blythe and Youngmee go to find the twins. She hands them their team shirts as they try to get out of it, but it is no use, so they go to change.

Scout is still stalking Mrs. Twombly and the pets still keep trying to get her to stop. Still it is no use, she will not say a word and she seems to have finally reached her!

Back at school, Blythe and Youngmee are waiting for the twins to arrive. Whittany shows up and she informs Blythe that Brittany got a really bad rash from material in the shirt. Blythe points out they have a meeting going on and she can't just leave to get the ointment Brittany needs. So Blythe forces her to compete with them, since they need to do it now and don't have the time to wait.

As a last resort, the pets grab onto Scout and force her to the floor as she almost gets ahold of Mrs. Twombly. At her last straw, Scout tells them off and she demands to know why they have been harassing her all day. They admit that they "know of her evil plans" and Scout reveals that she only wanted Mrs. Twombly's newspaper. She reveals that she likes to shred paper. Russell admits that he did see her doing that. When they point out how suspicious she is, she claims it's a species thing.

At the last question, Blythe and Youngmee are beyond exhausted and are too tired to do anymore work. Blythe tries to force Whittany to do it, but she reveals that she is the one to "translate" the problem. It's really Brittany who solves them. This makes Blythe realize why they do so badly on tests, they're only smart when they work together. Blythe begs that she tries anyway and she does, but her answer ends up not even being close to the actual answer. After being told who won, Whittany storms off. And so, tiredly Blythe accepts the detention she promised to take and tries to make it a good thing by saying she can use it to practice her math some more.

At the pet shop Blythe finds everyone shredding up paper. She asks about it and Zoe explains they thought suspicious of her but it turns out they were totally wrong. Mrs. Twombly comes down with the paper and asks Blythe to give it the pets when Blythe mentions it's a comedy newspaper, filled with all sorts of random, strange, made up news. As Blythe laughs about the pets realize the entire thing was made up. It's then Scout questions what they thought when her mysterious owner shows up to claim her, leaving them with a mysterious little chance that she may indeed be a spy...

And at school Brittany is still inside the girls bathroom waiting for her sister... 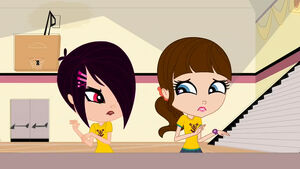 Click here to go on Books and Covers image gallery