Brittany and Whittany Biskit are the main antagonists of Littlest Pet Shop. They are the archenemies of Blythe Baxter, the daughters of Fisher and Eliza Biskit, and the owners of Cashmere and Velvet.

"Glamour isn't something you can learn. We were, like, born with it."
—Brittany

As they are twins, Brittany and Whittany look almost exactly alike other than minor details as they both have fair-pale skin and bright red eyes with what seems to be just a bit of eyeshadow and dark lipstick. The twins' most common attire consists of school-oriented uniforms.

They are often seen sporting punk / gothic symbols and designs within their own outfits and accessories, such as the studded leather bracelets, dog collar necklaces, studded belts and their leggings with the skulls and cat heads printed on the sides in Penny for your Laughs, the large skull and crossbones on the satchel the twins use to carry the flyers in Door-Jammed, as well as their own hairstyles, which is the long fringe that is parted to one side covering the eyes to be a typical "emo" hairstyle.

Coming from a wealthy family, Brittany and Whittany are naturally spoiled, such as having numerous laptops in case one happens to get angry enough to break their current laptop. They often spend their time shopping or texting on the phone instead of focusing on important things unless it provides something good for them. Brittany and Whittany only think for themselves and have no problem criticizing others for their friends or fashion, with no intention to apologize or take the comment back. They do not even realize this is what makes other people get angry with them as they think a lot of people like them. Though in later episodes, they have admitted that other children only like them when they give away free stuff.

While Brittany and Whittany are good when it comes to thinking up plans, they lack the smarts to really pull it off. As a result, they either wind up embarrassing themselves in front of others or just taking off in a huff. They also both seem to get into a lot of trouble in general, which is implied when their father reminds them to try not to get expelled that day at school.

Though it is worth mentioning that while the twins are quite similar, they do have some differences. Whittany seems to be the smarter of the two and also appears to enjoy Blythe's company, only acting like she cannot stand her because Brittany hates her (Door-Jammed); however, Whittany later reveals an equally genuine dislike for Blythe. Meanwhile, Brittany has a "spacey" train of thought and does not like Blythe at all, which would indicate she is actually the dominate twin. This is also supported by the fact that she seems quicker to make insults or degrade someone.

The twins appear to have a distant or shallow relationship with their father as they have been shown to not even know what a parent is or what they are supposed to do. Their father is shown numerous times trying to teach them lessons of hard work and trying their best; however, the twins seem too apathetic to care for the most part.

In one episode, they form a friendly relationship with Roger that creates some jealousy. This may be due to the fact that Roger, who is a loving parent, knows how to spend time with children and was giving them quality time by playing board games and such. This made them feel genuinely happy, something they both admit they never felt before. This made the twins not only realize they were missing out by having a father who does not do such things, but increased their resentment and jealously towards Blythe.

They are so mean that even the pets at Littlest Pet Shop show hostility towards them, like in Blythe's Big Adventure Part Two, where Russell prevents them from ruining the pet fashion show. During Trading Places, they also angered Russell after he overheard them insulting Blythe and himself and even Sunil has expressed anger towards them by saying they should form an angry mob and attack them. Their hostility towards them becomes major in Bakers and Fakers, where they stop them from cheating in the baking competition after they stole Blythe and her friends' recipe and design card. As well, Sunil approached Whittany and kicked her in the shin.

Despite the twins' nastiness (and the fact that they brag to each other about how cruel their plans are), they occasionally refuse to admit they are mean or even outright believe they are nice. Going even further, they have stated a few times that Blythe is the mean one.

While the two compliment each other on a clever plan, in Feud for Thought, they proudly admit they are not smart as they find smart kids repulsive, so they get F grades on purpose to uphold their reputation. They find studying, learning or any work in general disgusting. They do not even like hearing someone say the word "work." Despite that, Books and Covers shows that the two are Algebra geniuses, but only if they work it out in a secret code that only they understand. 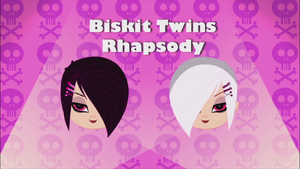