Start a Wiki
Buster Howe is a recurring character of the series. He is not named in the series, but his name is used in merchandise.

In December 2014, a toy of him was announced. He is bundled with Wagger Hobbs in the "Styles to Howl About" Pet Pair, which is the source of their names.[2] 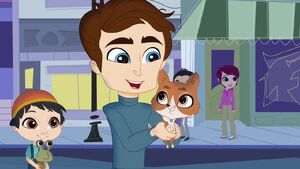 Retrieved from "https://lps2012.fandom.com/wiki/Buster_Howe?oldid=61903"
Community content is available under CC-BY-SA unless otherwise noted.