Buttercream Sunday[1] is a Netherland Dwarf Rabbit who has appeared in Topped With Buttercream, among other episodes in which Sweet Delights is present.

She is owned by Youngmee Song's Aunt Christie.

Buttercream is a dull-yellow colored rabbit with brown coverings / markings on the tops of her ears, tips of feet, and a flowery circle shape around her left eye. Her nose and inner ear coloring is pink. Her eyes are a dark, emerald green. Buttercream also has a white muzzle, chest / stomach, and cotton tail.

She wears a simple pink bow on her left ear with a giant peppermint candy in the middle.

It is assumed that Buttercream has a ton of energy, pep, and sweetness due to large sugar consumption, but she also has a mischievous streak which can land others in trouble.

When she arrived at the day camp, she had shown to be a social butterfly, gaining the admiration of the other pets immediately.

In Topped With Buttercream, she led the pets to the next door sweet shop and broke into the pantry, eating loads of sweets. However, this led to a negative effect and everyone began to argue for the remaining candy inside the shop.

She is a good dancer and often talks in rhyme and alliteration, much of which is nonsensical to the context of her message (e.g. "Thanky thanky cotton hanky"), but she has been shown to use her rhyming nature to convey a clear message (e.g. "Those sweet treats hit the streets"). She has a bizarre habit after this: Whenever someone asks her "What?", she answers with "What?" too, her pupils move, then stamps her foot, bites her lip, and twists her ears, followed by her calming down, sighing, before she says, "Anyhoo..." afterwards. Her speech disorder is called clanging. Blythe appears to be influenced by this as she talks like Buttercream when she accepts her father's apology in Sweet (Truck) Ride and also mimics Buttercream's habit in Snow Stormin'.

Often, she is incredibly impulsive, but is often too energetic and upbeat for any negative impulsive decisions she makes to affect her personally. In Frenemies, after attaching a new tail to Vinnie out of a Wafer cookie, she proceeds to eat it almost immediately, much to the dismay of Russell, Sunil, and Vinnie.

In Race Team: Buttercream, whenever Buttercream hears a ding from a bell, she is hypnotized and turns into a competitive, rough-talking bully named Flash McCarrots. It is unknown how this happened.

In fall 2013, a Buttercream Sunday toy was released as part of the Sweet Delights Sweet Shoppe playset. 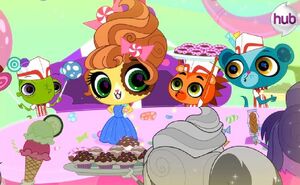 Retrieved from "https://lps2012.fandom.com/wiki/Buttercream_Sunday?oldid=67759"
Community content is available under CC-BY-SA unless otherwise noted.