Cairo is a Sphynx Cat who first appeared in Alligators and Handbags.

Cairo has made her first appearance in Alligators and Handbags.

Before the episode, she had been sent by her owner to a day spa in the hopes of getting her to relax. Unfortunately, this did not happen (according to Cairo).

Cairo is first mentioned by Roger, who had the task of flying the cat back home to her owner. Roger had the good fortune of meeting Mona while delivering Cairo and had the opportunity of getting Blythe a chance of speaking with Mona.

Before long, Blythe was in Mona's office. Blythe was able to converse with Cairo (who noted Blythe's ability to speak with animals) just before speaking with Mona. She received some tips courtesy of the cat that might make their meeting a bit more smooth – do not blink twice in a row, avoid use of the word "gorgonzola," and never look at Mona's ankles.

Though the meeting did not go as planned, Blythe was not going to give up. Taking her pet backpack with her back to Mona's place of business, she chased down Mona and even sent her pack into Mona's elevator. While in the elevator, Cairo (possibly feeling some sympathy for Blythe) hopped into the pack – much to Mona's surprise. By the time Blythe reached the bottom floor, Mona's position concerning Blythe had changed for the better (with Cairo giving Blythe a wink to show she was on her side). 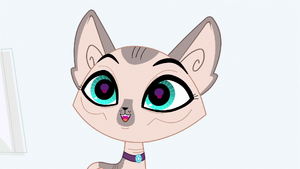