Casey Cottonpuff is a recurring character in the series.

She is a blue bunny with darker fur at her tail, around her neck and atop her head. She has purple eyes.

She is present at various crowd scenes, such as the Pet Fashion Show to save Littlest Pet Shop and the line to get into the shop from Blythe's Big Adventure Part Two; Minka's art fantasy from Bad Hair Day; the pets escaping from Largest Ever Pet Shop in Gailbreak!; and the singing crowd of Pet Friendly Skies from Blythe's Big Idea.

In February 2014, a toy of her was shown at Toy Fair 2014 as part of the Franchise Re-Invention. She is bundled with Pinky Beekman in the Yummy in Out Tummies themed pack, which is the source of her name.

In March 2015, a larger figure with her likeness - once more named simply "Bunny" - was announced to be available for May 2015. Along Penny Ling, it formed the "Littlest Pet Shop 8-Inch Figures Wave 1 Set".[2] 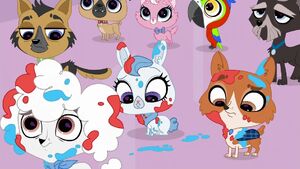