"It's like you're the furry little versions of the Biskits."
—Vinnie Terrio, Two Pets for Two Pests

Cashmere Biskit and Velvet Biskit are twin chinchillas who are adopted by the Biskit Twins in Two Pets for Two Pests.

They are grey in color with a black pointy nose and fuchsia eyes. Both of them have light grey muzzles and bellies, with dark red ears and tufts of fur around the neck. Cashmere and Velvet both have hair worn in a single pigtail on the top of their head, held by fuchsia beads, until the Biskit Twins re-did the chinchillas' hair, giving them the same hairstyles as the twins themselves. They are differed by the fact that Cashmere has a black tail and hair, while Velvet has them pale pink.

Brittany and Whittany Biskit adopted them for the school's Pet Appreciation Day, so they could be excused from classes for the day. The chinchillas adored their new home and owners, but the kids planned on turning them in to a chinchilla orphanage at the end of the day, much to the pets' shock and disappointment.

Upon hearing this, Blythe tried to help them avoid this fate. To help her, Penny Ling and Vinnie Terrio told them to try acting cute and nice. Meanwhile, Blythe tried to convince the Biskits that pet ownership could add a lot to their life, but they replied they liked their life just they way it is.

The chinchillas' unexpected popularity during the event gave Brittany the thought that owning pets could be a good thing. Whittany replied that taking care of them would be work, a word the Biskit Twins repulse. Blythe tried to convince them otherwise by saying chinchillas can clean themselves, which Cashmere and Velvet immediately demonstrated. The chinchillas' friendliness earned Brittany's love, but Whittany insisted that they didn't want pets, convincing her sister that they're boring.

They then went to take a break and left the chinchillas under Blythe's care. Cashmere and Velvet angrily told Penny Ling and Vinnie their advice made the Biskits hate them twice as much. Blythe told them she would try to find them a good home, but they wanted to stay with the Biskits. Blythe then told them to be their natural Biskit-like selves.

Sherman took interest in the chinchillas, but they turned their backs to him. He called them "moody", prompting the Biskits to rant in their defense, without even understanding why. Blythe told Vinnie to help the chinchillas, so he jumped at the Biskits' heads and provoked Cashmere and Velvet to chase him.

That caused a chase involving a duck, a dog, a snake, Lucky Browne and a pig, making a mess that amused the Biskit Twins. Blythe told them their pets were out of control, so Brittany used a loudspeaker to tell them to stop and they obeyed immediately. The Biskits were delighted that their pets listened to them rather than Blythe, who said they were total troublemakers for causing that ruckus, further delighting the Biskits.

Monsieur LeGrande was ready to take them to the chinchilla orphanage, but Blythe persuaded the Biskits to keep them. The butler secretly assured Blythe that the pets would be in fine hands, because he had grown up in a chinchilla ranch.

Cashmere and Velvet Biskit on a way to their permanent home, now with the same hairstyles as the Biskit Twins 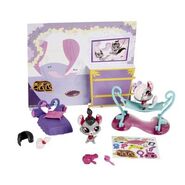 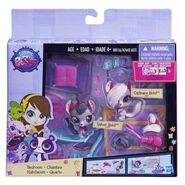 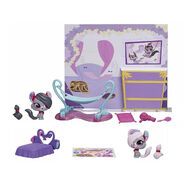