Digby is a handsome dog that frequently visits the pet shop's day camp. He is brown with blue eyes and wears a red scarf with white spots around his neck.

Digby was inspired and named after the Cahill's own dog.[1]

When Digby made one of his infrequent trips to the day camp, Zoe, who was suffering from a large blemish on her nose, asked Penny Ling to convey her feelings for him. This seemed to backfire when Digby appeared to be interested in Penny instead. However, when Digby finally encountered Zoe face-to-face, he told her he hoped they could spend some time together on his next visit, and kissed her on the nose before his owner collected him.

Zoe has a huge crush on him and at the end of the episode, he returns his feelings to her with a kiss.

He is also quite friendly with Penny Ling. 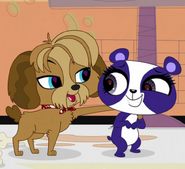 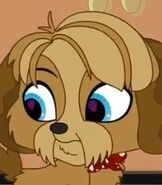