Dolores is a slow loris who only appeared in The Very Littlest Pet Shop.

Dolores is easily irritable and does not like to be stared or laughed at.

Dolores is a slow loris with light brown eyes.

Dolores speaks with a squeaky voice. She was part of an educational tour and eats slowly.

Dolores snarled when Blythe and Mrs. Twombly started to laugh, then told Blythe she was from the darkest regions of Tamango. Blythe told the pets not to laugh at her, but Pepper could not help herself laughing about her voice and how slow she ate. She became furious when Pepper kept laughing at her, so she placed a jungle curse on Littlest Pet Shop that made it tiny, though it is later discovered it was only Vinnie's imagination.

"You do NOT want to make me angry!"

Dolores' true powers have been unleashed! 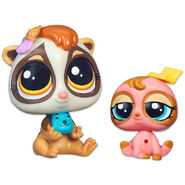