Door-Jammed is the twenty-third episode of the first season of Littlest Pet Shop.

Blythe accidentally gets locked in a bathroom with Whittany. The pets hear strange howling and try to identify the werewolf among them.

Mrs. Twombly is about to receive a special doorknob, when she is outbid. She has a small outburst and is angered and devastated to discover that Fisher Biskit outbid her.

Sunil and Vinnie are watching a werewolf movie when they hear Mrs. Twombly yelling and they think it is a werewolf in the pet shop.

Mrs. Twombly debates on going to get the doorknob or not and then decides to get it for herself.

Blythe is walking down the street, talking to Youngmee on the phone, when she sees Fisher kick Brittany and Whittany out of the limo and tell them to pass out invites to his art exhibit opening. The twins spot Blythe and give her the bag, telling her to pass them out. They then walk away.

Blythe goes back to the pet shop and tells Mrs. Twombly about the party, to which Mrs. Twombly says they should go. They then go dress shopping. When they return, Roger is there and agrees to fix things while he fixes the shop. After Blythe and Mrs. Twombly leave, Roger drops the hammer his foot and howls in pain.

Sunil and Vinnie hear this and again think it is a werewolf. They see Russell's shadow on the wall and get spooked. Russell's stomach growls, making Sunil and Vinnie decide that Russell must be the werewolf. Sunil and Vinnie come at Russell (who is playing cards with Zoe) with garlic and a mirror. Russell tells them that garlic and mirrors repel vampires, not werewolves. Vinnie then asks if Russell has howled at any moons lately and Zoe says she does it all the time. Russell explains that dogs are distant relatives of wolves and if anyone is a werewolf, it is Zoe. Vinnie asks Zoe if she has ripped anything from limb to limb recently and spots one of Zoe's badly mangled dog toys, leading Sunil and Vinnie to think both Russell and Zoe are werewolves. They begin screaming and run up the tree. In frustration, Zoe backs away from Russell.

Blythe and Mrs. Twombly arrive at the mansion, and ask the Biskit Twins if they know where the doorknob is and when the twins say no, Mrs. Twombly goes to look for it. A man knocks into the twins and Whittany's drink spills on Blythe's dress. She then goes to the bathroom to clean it off.

Mrs. Twombly spots the doorknob she wanted, and takes it, putting it in her purse. Blythe goes into the room which had the doorknob attached to it (Whittany's bathroom) and tries to clean off the stain.

Sunil and Vinnie watch the other pets and freak out when they see Penny Ling's "claws" (a manicure) and Pepper's really sharp teeth. Russell then chastises them for believing in werewolves. Vinnie throws a silver bowl at Minka and claims she is a werewolf because she ducked. Minka says it is because she did not want to be conked in the head with the bowl. Penny Ling then points out that Pepper has sharp teeth and Pepper points out that Penny has long hair. Sunil and Vinnie say Zoe has werewolf-like senses of hearing and smell. Now convinced that someone in the shop is a werewolf, everyone starts to argue. Russell comments this will not end well.

Blythe is still in the bathroom and cannot get the stain of  her dress. Then Whittany walks in and closes the door, then tells Blythe to leave. Blythe tries, but finds she cannot leave. Blythe realizes she and Whittany are trapped. Whittany screams in horror and it echoes around the hall.

Russell is sitting on a chair reading while the other pets are in a circle, threatening each other with silverware and wolfsbane. Zoe says Penny Ling's name three times (the supposed cure for werewolfism) and wonders why it did not work. Zoe's stomach growls and everyone runs away in terror. Russell yells at them that there is no such thing as werewolves. Vinnie responds that is what a werewolf would want them to think and they are watching him.

Blythe and Whittany are still stuck in the bathroom. Blythe suggests playing rock-paper-scissors, which is shot down by Whittany. Blythe says if her father was here, he could get them out because he is good at fixing things.

Blythe's philosophy did not last long; at the shop, Roger tries to fix things with no success. He drops the hammer on his foot again, spooking the pets with his howl-like yell. Russell makes fun of them, then snarls, and the others run away. Russell sighs in exasperation.

Back in the bathroom, Whittany is pacing and babbling and snaps at Blythe when she asks if she is freaking out. Whittany points out that she and Brittany are the most popular kids in school and everyone wants to be their friend – except Blythe. Blythe notices that Whittany sounds sad when she says the last part. Whittany states it is only Brittany who does not like Blythe and they start talking. Blythe even says she has always wanted a sister. Brittany goes looking for Whittany and hears her and Blythe giggling in the bathroom. Brittany says she will get Whittany out and goes for help.

Back at the shop, the pets are hiding in the corner, shaking, and Russell explains to them there are no werewolves and the reason they are convinced is because they are all animals and a lot of animals have the same characteristics of a werewolf, such as fur, fangs, and claws. He also points out that werewolves only come out at night and it is the day time. The pets decide it was only their imagination and put it behind them.

Mrs. Twombly goes looking for Blythe and finds out she is stuck in the bathroom, so she replaces the doorknob. Blythe and Whittany walk out, talking and giggling. Brittany's mouth falls open and she asks Whittany what she is doing. Whittany goes to stand by her sister and very rudely tells Blythe to leave. Blythe is confused by what just happened at first, but then tells Mrs. Twombly they are leaving and walks away.

Later, Blythe and Mrs. Twombly are back in the shop. Mrs. Twombly decides she does not need the doorknob and asks if she embarrassed Blythe, who says no, and Roger (who is covered in bandages) goes to fix the shelf again.

Blythe goes to see the pets and hears the werewolf story and asks how they could possibly think a werewolf was in the the shop. Blythe points out they all smell like garlic. Then Roger gets hurt again and makes the howl-like sound again. Blythe and the pets put garlic around their necks while shaking in terror as the episode ends.

Russell: Hedge-wolf? Let me get this straight. You think I'm a lycanthrope?
Vinnie: No, we think you're a werewolf!
Russell: Vinnie, a lycanthrope is the technical name for a we- oh, forget it.

"See how you handle this, werewolves!"
—Vinnie

Russell: You all know there's no such thing as werewolves, right?
Vinnie: That’s exactly what a hedge-wolf would want us to think. We’ve got our eyes on you!

Sunil: We heard a howl!
Vinnie: And an unholy shriek!
Penny Ling: It could've been a werewolf!
Pepper: Or Russell.
Sunil: Most definitely Russell. He looks like a werewolf in the dark.
Russell: Do not!
Zoe: It could have been any of us! (Pause) Except me. 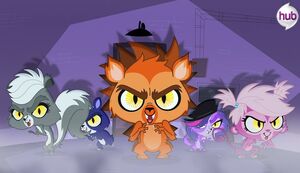