Dumb Dumbwaiter is the ninth episode of the first season of Littlest Pet Shop.

Penny Ling leads the other pets on a mission to free Blythe, Zoe, Pepper, and Minka when they get trapped in the dumbwaiter.

Mrs. Twombly is busy at work stacking a whole bunch of cans when they suddenly spill over. However, not at all discouraged she resumes stacking the cans.

Meanwhile, up in Blythe's room, she and the girl pets are having a girls day to themselves and have just finished playing around with the beauty supplies, much to Pepper's confusion with a couple of them. The girls comment on how nice it is to be without the guys for once when Minka spots Blythe's emergency comb and asks to have it, immediately drawn to the gold comb with small rubies decorating it. Blythe does not want to give it to her, but a persistent Minka refuses to give up. She explains she brings it with her everywhere, just in case; she could never part with it, even if it was to give it to a dear friend. In the end, Minka ends up laughing over it with the others and decides to give up.

As the girls continue playing with makeup, a pleasant scent wafts about the air. Pepper reveals she was feeling happy, so she started to spray. She then asks Zoe how she likes her eyeshadow and makeup. Zoe hates it, which offends her until Zoe manages to flatter her.

Meanwhile, the guys are boredly playing with a ball. Lazing about, they slowly begin to realize just how much fun they could actually have without the girls around. Then they decide to sing about it – only to right after decide they are very bored after all and wondering what the girls are doing.

Back in Blythe's bedroom, the girls are just hanging out when Sue calls Blythe to ask her why she has not shown up yet. They had a flash mob meeting and last time Blythe totally flaked on her and did not show up. Blythe admits she forgot about it promises to be there soon. She apologizes to the girls and promises they can do it again really soon. Before she leaves, she is stopped, upon realizing Minka took her comb. She then gets a call from Youngmee telling her to hurry up. She tells everyone to hurry up and get into the dumbwaiter and accidentally drops her cellphone behind her. As Penny Ling goes to join them, she is distracted by some popcorn on the floor and stays back to eat it. Before she gets inside, one of the dumbwaiter ropes snaps, making them fall down partially. However, they are trapped inside the dumbwaiter. Both Pepper and Zoe make it worse by pointing out how much trouble Blythe will get into for this. She then realizes she accidentally left her cellphone on the bed.

The sheer revelation that the girls are stuck in the dumbwaiter for an indefinite amount of time makes Minka work herself up into a frenzy as Blythe tries to tell Penny to pull on the rope. She does, but is not heavy enough to pull them back up. The rope is also tangled and knotted up and it will not be going anywhere anytime soon. Blythe tells Penny she will have to climb out of her window to get to the pet shop in order to avoid being detected by her father. Blythe also tells Penny to make sure Mrs. Twombly does not suspect anything, out of concern that she would be very angry upon finding out she and the pets are in danger. However, upon saying this, this makes all of the pets freak out.

Bravely, Penny chews some gum she happened to have on hand to help her float outside. A bunch of pigeons fly by and one accidentally pops her bubble. Before Penny can get hurt, she grabs the little bird's feet and manages to get a little closer, only to fall onto the pet shops flag holder, then flung up into the air and back down, across the street and into a tree, then finally in a garbage can.

Inside the dumbwaiter, the tension is slowly beginning to get to the four girls. Minka continues to have a meltdown while Zoe and Pepper start to fight. After Blythe brings out her emergency comb, she does manage to calm Minka down.

Penny Ling slams the door behind her as she enters the pet shop, making Mrs. Twombly's can pile fall again. Penny runs through the pet's playroom door and informs the guys what happened to the others. Unfortunately, neither of the guys can think of a good plan to help the girls. Plus, they got locked into a gate, but Penny happens to notice the lock and she opens it, allowing them to freedom. The four pets then quickly leave to go and save the girls.

Once again in the dumbwaiter, Pepper and Zoe resume arguing and fighting until Blythe mentions a different smell this time. Zoe reveals she has kept a very old dog bone under her hat to snack on. Pepper argues with her about holding out on the food, but after she sees it she decides she does not want to eat anymore. Everyone gets into Blythe's room and they approach the dumbwaiter. They use the rope to get on top of it and Penny asks them to jump on top of the dumbwaiter until they loosen the rope allowing them to go down. Everyone notices it is moving, but it is not enough and the ropes knot eventually comes loose.

This sends everyone flying down towards the ground while they all yell and panic. Minka remains cool and uses Blythe's emergency comb to slow them down to a gentle stop and everyone jumps out of the dumbwaiter.

Everyone cheers for Penny Ling and her brilliant plans in saving everyone. Pepper also claims they should cheer for Minka for using the emergency brush to slow their fall down. Zoe apologizes for being so rude to Pepper earlier.

Later, Blythe explains to Youngmee and Sue why she did not get to show up for their flash mob. She apologizes while they say they wish they could have helped her. Sue informs Blythe that because she was not there, they ended up recording it for her. Sue warns her she may not like it, but Blythe does not understand why until she sees it was her father in the video.

Blythe gets up and runs over the dumbwaiter as Sue and Youngmee question this. She explains she was going to try to get stuck in there again since she will need a place to hide, causing them to all burst out laughing as the episode comes to an end. 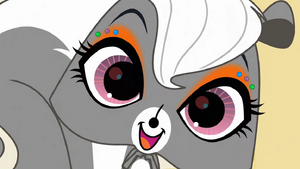