Blythe is preparing the pets for the upcoming International Pet Fashion Expo, assuring them that they will look great. Pepper remarks that they must not only look good, but also smell "happy", to everyone's confusion. She explains that smelling happiness on them would make the judges subconsciously happy; Penny Ling replies that makes sense. Pepper then prepares to capture her happiest of happy scents: A delicate, peppermint-rosy, just-baked cupcake blend.

A fantasy begins with a lightning. Inside a castle on a summit, Pepper sticks her tail at a tube to collect her scents while Penny Ling operates a machine. Pepper asks for her to start showing her the pictures. A screen comes down and is turned on, showing Pepper's rubber chicken. Pepper laughs while producing a light yellow fume, which causes a small explosion when it drips on Penny Ling's test-tube. She smells it and happily states it smells like vanilla.

A shocked Pepper replies that is not right, prompting Penny Ling to reserve the tube and pull a lever of the machine. The screen changes to a picture of Pepper's arrow head-bow. She laughs even more and produces a pink fume smelling like blueberry with a hint of jasmine. "Nice, but still not right."

The screen changes to Old Bananas dancing while holding bananas, an orange fume. Blythe making a silly face, a cyan fume. Groucho glasses, Pepper does not look so good when she produces a white fume. Chattering fake teeth, Penny Ling coughs while reserving a pink fume. A singing fish, a green fume, a punch-glove-in-a-box, a yellow fume.

Pepper looks bad while Penny Ling coughs uncontrollably in a room filled with fumes. She says all of Pepper's scents are mixing together. Pepper refuses to stop until she finds her happiest scent, despite Penny Ling's warnings. Pepper says, "Just one more!".

Penny pulls a big double lever, starting a red alert and changing the screen to a picture of Captain Cuddles with a heart background. A love-struck Pepper produces a bright pink fume that creates a heart-shaped explosion. The peppermint-rosy cupcake smell, as confirmed by Penny Ling. Pepper tells her to cap the tube quickly, but Penny Ling trips on another one and drops it, creating a big explosion.

Back to Littlest Pet Shop, now filled with the fume, Blythe states that it smells fantastic. An exhausted Pepper asks Penny Ling if she captured it, which she denies. Blythe calmly says they will just have to try again and they faint. 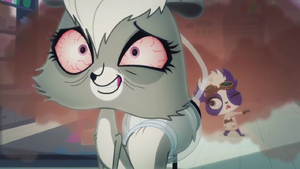