Eight Arms to Hold You is the third episode of the second season of Littlest Pet Shop and the twenty-ninth episode overall.

When asked whether the episode's title was a reference to an album of the same name by alternative rock band Veruca Salt, Julie McNally Cahill replied that it was actually inspired by the original title of the Beatles film, Help![1]

Russell is excited about his first overnight stay at Littlest Pet Shop with Blythe until his irrational fear of ghosts interferes. Meanwhile, Sunil and Vinnie pull out every stop to crash Russell and Blythe's nocturnal event.

No songs were featured.

Vinnie: After all, no celebration is complete without the two greatest party guests of all time...
Sunil and Vinnie: Us! 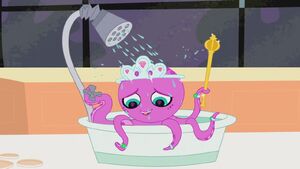 Retrieved from "https://lps2012.fandom.com/wiki/Eight_Arms_to_Hold_You?oldid=56665"
Community content is available under CC-BY-SA unless otherwise noted.