"Mother, where have you been for the past three seasons?!"
—Whittany Biskit

Eliza Biskit is Brittany and Whittany's mother and Fisher's wife.

Eliza has black hair with a streak of white in it. She also has brown eyes.

Eliza is shown to have a habit of breaking into song at random moments.

Despite being very kindly and bubbly, she is not the best mother and is very bad at raising children. 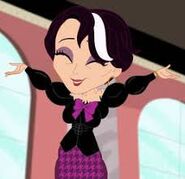