Esteban is a scarlet macaw with yellow eyes.

When Esteban arrived at Littlest Pet Shop, he quickly won over most of the pets with a story about how he saved his home village from bandits. The only pet who did not believe him was Vinnie; he later researched Esteban on a computer, learning his story was not true. Just as Vinnie was about to reveal the truth, Sunil declared he had just had a psychic vision that Blythe was lost. Eager to keep Vinnie from outing him, Esteban suggested they search for Blythe.

Near the end of their search, the pets were almost trampled by a crowd of people. Esteban swooped in and carried them to safety. Afterwards, he convinced Vinnie not to tell the others the truth, explaining that storytelling was the only talent he had. 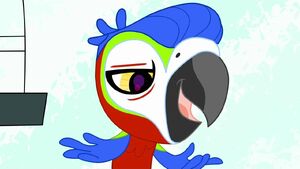