Eve of Destruction is the tenth episode of the first season of Littlest Pet Shop.

Mrs. Twombly is away in search of her favorite cleaning supply while Blythe is left to manage the shop and keep the peace between Zoe and rival dog model Madame Pom.

Blythe and Russell come into the pet shops main lobby to find Mrs. Twombly in the middle of one her cleaning jags. After Blythe comments on how clean the lobby already looks, Russell informs her that it thankfully is a one day thing, even if that day happens to be quite long. While Blythe watches Mrs. Twombly's cleaning frenzy with the pets, she is asked to help her by polishing the turtles shell. She then asks Mrs. Twombly if she could do something new with the window display as she has made some new fashions. She agrees to it before asking Blythe help finding her snake scrubber.

In the pets playroom, the pets are busy playing with one of the electric mice when Penny Ling gets caught in her silk ribbon as she dances with it. She and Vinnie start to argue over their differences in dancing style as the other pets watch. Eventually, it ends when the two of them collide and get knotted up. Some new voice compliments them on this and approaches them while she goes on to say how wonderful she thought it was. Zoe walks in, asking if the others may have seen her rubber toy when she sees Madame Pom and they explain their past to the others.

Blythe comes by with her manique pets when she notices Zoe gloomily sitting in the front window. She tries to convince her that it will not be so bad, since it will only be for a day but Zoe is not too convinced. Blythe accuses her of being too dramatic, but Zoe denies it. Suddenly hearing Mrs. Twombly, she finds she has run out of her favorite cleaning spray. This sends her into a minor cleaning craze, pointing out how "filthy" the store is as she did not finish upon running out of spray, so Blythe volunteers to get her another bottle of spray. Mrs. Twombly refuses though and insists she just go and get it herself since it is a very special spray. So while she leaves, she has Blythe watch the Pet Shop for her.

Blythe goes back in to inform the pets that they need to behave and try to keep clean and not fight while she is working on the window display. They agree to it and she tells them to only contact her if it is important and they agree. Blythe takes Zoe to the front with her, but Zoe does not stay and she finds Minka working on a portrait of Madame Pom, much to Zoe's shock. Madame Pom walks away in a huff after Minka informs her she is an abstract painter. Zoe likes it though and compliments Minka on it. Madame Pom then forces Sunil to get out of his spot so she can lay down in it, then she watches as Penny Ling and Vinnie perform for her. However, this causes a huge mess in the play room and everyone stops what they are doing to eat the massive pile of animal food that spilled onto the floor. Blythe asks if everything is okay and, upon being told, continues her work in the front window.

Meanwhile, Mrs. Twombly angrily tells off the people working at the shop she went to in order to get her spray. Apparently, due to a little added jet fuel, they discontinued the product and the man offers her some other product, to which she mocks before storming out.

Back at the pet shop, Madame Pom is showing some of her modeling work she has done to the others. They all enjoy it when she suddenly starts to mock Zoe. Zoe comes over and claims she would be a much better model and she also points out that she has been doing some modeling work. Nobody really knows what she has been talking about though, but she claims that if Madame Pom needs proof, she has a mobile app for it. They start to argue and after they both claim to be better then the other, they decide to have a modeling challange to see who is truly better. To do this, the girls decide to be Blythe's models in her window displays.

Mrs. Twombly goes into a minor meltdown upon seeing the bigger chain shop does not have the spray she wants either. Much to the surprise and shock of many customers.

Madame Pom is in the middle of applying makeup and what-not as Penny and Vinnie approach her to get advice on how well they perform together. They as her if she thinks they could be professional and she suggests they go for it. Meanwhile, Zoe is practicing her model walk when Blythe confronts her to question this. Zoe reveals she honestly does not care about being a model, she just wants to win. She calms down but just for a minute, as Madame Pom ends up infuriating her again. She angrily tells off Madame Pom, who then finds an outfit she plans to wear for the model-off between them. Zoe then proceeds to look for her own outfit to wear.

In the other room, Penny and Vinnie have begun to practice their dancing and performance together but they keep running into small problems, like tangling Penny's ribbon and getting hurt. As the girls begin their model-off and people start to watch them, Mrs. Twombly runs around the entire town when she randomly happens to find someone with her spray.

Penny and Vinnie continue their dancing, making their way through the entire pet shop seemingly unaware. Minka is spraying paint everywhere and the electronic mice have also gotten loose. Eventually, everything falls apart. Both Zoe and Madame Pom start to laugh when Pom admits she once accidentally fell off the stage and landed in someones lap. A shocked Zoe questions this, and Madame Pom claims that she doubts it would have happened to Zoe, because she has a better walk. They share a hug when Zoe admits she only wanted to win against Madame Pom. Penny and Vinnie see how much damage they have done when Mrs. Twombly calls Blythe to inform her she will be back to the shop in 20 minutes.

Blythe panics until Russell gives a speech, stating that as friends, they have to pull together and help Blythe. He goes on until Pepper interrupts to inform him they do not have much time. So everyone gets to work.

While cleaning, Penny and Vinnie agree that while they work great together, they should probably just remain doing solo acts for everyone else's safety. It is then Mrs. Twombly returns to the shop with the bottle of spray. She sees that Blythe has finished cleaning for her, other then that one single hair on the counter but she claims it is okay and leaves the room – just as the bag of garbage falls into the main room and breaks open. 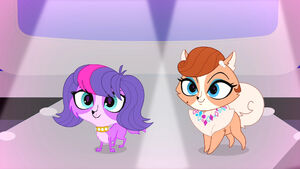 Click here to go on Eve of Destruction image gallery