Felina Meow is a cat that first appeared in Littlest Pet Street - Part 1. She is a viral video star.

When she first meets Blythe, Felina is rude, selfish, and demanding. She admits in Littlest Pet Street - Part 2 that she never had the opportunity to work with others before and was jealous of how close the pets are.

Eventually, she warms up to the other pets and agrees to be in their movie. 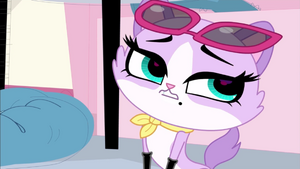