François LeGrande,[1] formally addressed as Monsieur LeGrande and more often simply as Butler, is a servant of the Biskits, performing works such as chauffeur and chef, and often fulfilling the demands of Brittany and Whittany Biskit.

François first appeared serving as a garçon at the twins' lunch table at school, amazing Blythe with his abilities. He prepared them a five-course lunch. During BFF's, he drove the girls' limousine, danced to the beat, and stood on all fours for them to sit on his back while trying on new shoes. The twins later ordered him to get back all of their gifts to Blythe.

For the cake competition, the twins intended to make him cook for them, but Fisher did not allow them. This episode marked the only time either of the twins called him by name, rather than simply butler, driver, garçon, etc.

He was present in Door-Jammed, in which he had his first speaking appearance.

In What, Meme Worry?, he helped the twins in their attempt of getting viral, by participating in their music video. While searching for an idea for them, he ran into another music video that really got into his nerves, to the point of beating the laptop and throwing it at the fireplace.

In Grounded, he was surprised by Roger being able to make the twins laugh.

He helped the twin at their class president run by serving gellato for the Downtown City High students.

During the International Pet Fashion Expo, the twins forced him to disguise as a photographer and distract Blythe while they stole her kiosk. When their plan failed and he confirmed the twins' actions, they claimed they would fire him. Disappointed, he expected that reaction. However, Mona Autumn was impressed by the good pictures he took, so she decided to buy them.

The twins failed to fire him as he was still working for them in Two Pets for Two Pests. He was ready to take Cashmere and Velvet to the chinchilla orphanage, but the girls decided to keep them. He secretly assured Blythe the pets would be in fine hands because he had grown up at a chinchilla ranch.

He clearly doesn't get paid compensation for annoyances caused by his boss' children. 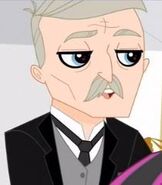 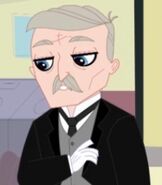