"With Zoe's sense of style, and Pepper's sense of humor, your anniversary party is sure to be a huge hit, Penny Ling."
—Blythe

Frenemies is the twenty-fourth episode of the first season of Littlest Pet Shop.

Zoe and Pepper get competitive planning a party for Penny Ling. Vinnie loses his tail and is shocked to discover that it makes him a better dancer.

Blythe, Pepper, Penny Ling, and Zoe are looking over the Littlest Pet Shop's picture book when they come across pictures of when they first came to the shop. Penny Ling admits she had been nervous when she first came and Blythe points out that by the time tomorrow comes, it would have been exactly one year. This surprises her and they decide to throw her a special one year party. Zoe and Pepper both want to plan it, so she suggests they just both do it together. However, this makes Penny Ling worried.

Shortly after, Vinnie gets in an accident and his tail comes off. This alarms him, but Blythe and the others research it on an animal doctor website. She reveals to him that this tends to happen sometimes to his species out of defense. Vinnie is very upset, though the others find it funny. When they try to re-attach it, the tail shrivels up into dust. After Russell grabs Sunil and Vinnie, they run out while Zoe and Pepper come into the room dressed up. Blythe asks them about their ideas and allows Pepper to go first. As expected, her idea is clown-themed. But not just any clown theme – a clown rodeo.

Before Penny can give her opinion, Zoe reveals her idea of everyone dressing up in fancy party dresses and making everything match. However, Pepper thinks this idea is not nearly as good as her own, so they ask Penny for her own opinion to let her decide. She is unable to do this while Blythe thinks they are both good and should just work together to plan one party for Penny.

Meanwhile, the guys have gotten an idea to attach a straw to Vinnie to act like a tail. They try to use a rubber band, but it is too tight and snaps off. It is then Buttercream comes by and suggests they use a cookie and frosting for him. He claims it feels weird, but they suggests he tries dancing – which works until she eats it.

In Blythe's room, she is showing Zoe all of their tablecloths. She picks the colors she likes the best and she asks Blythe to sew some sparkles and flowers on it. As she is taking off, Pepper appears to ask Blythe if she can "rodeo" her clown outfit more. Blythe seems to understand, but admits that she does not get how the two of them are doing this. When she asks again if they have bothered to discuss this together, Pepper acts suspiciously and denies answering.

Russell dresses Sunil in a white jacket. He claims the reason Sunil is struggling so much is just because he has never thought of himself as a doctor. So he tries to convince him he really is a doctor and they begin to imagine Sunil operating on Vinnie while his parents watch and take pictures of the annoyed Vinnie. After they finish, they continue to try out some ideas, such as a bottle pop / soda and a ruler tape. However, neither of them work out very well.

Back at the pet shop planning location, Zoe is stacking tea cups when a sudden shake interrupts. It is revealed to be Pepper rolling in hay cubes. When Zoe asks about this, they begin to bicker while a sad Penny Ling walks away to speak to Blythe. She mentions how she is concerned this will not work out since they are behaving weirdly. Meanwhile, Vinnie comes in, utterly depressed by the turn of events. He admits he will not be able to dance for her, but this makes Penny feel sad and she heads back to the Pet Shop. Blythe suggests to Vinnie that he tries to dance without his tail and takes out a tiny pair of doll shoes and adds some thumbtacks to them to make instant tap shoes. She sets them down for him to try and as expected, he dances pretty good and is doing much better without his tail.

Pepper is trying out the bull riding toy she brought in while Zoe tries to make a fancy display. When this proves difficult, she tells Pepper to stop, but Pepper does not and claims no one will even notice her party since everyone will be having too much fun to notice. When Zoe insults the idea of a clown rodeo party, Pepper insults Zoe by claiming she is not the fun type and because of that, they should not bother doing hers. It is then Vinnie comes in and tries to ease the discussion by showing them how he dances, but this only worsens things.

Eventually, the party comes along and the pets are divided. After Pepper grabs Russell and Sunil, Zoe manages to persuade Vinnie and Minka to join her by showing them the fancy food she made. Then Blythe comes in and both girls try to make her join them. This annoys Blythe, who points out that she liked both ideas, but they were supposed to work together to make a party for Penny.

Speaking of the panda, Penny happens to walk in and both girls are quick to try to get her to join them. She likes both ideas greatly, but she is unhappy because of how separated everyone has become and leaves as Pepper and Zoe argue and bicker. Blythe suggests that Pepper and Zoe play a party game with each other, by naming good qualities each other has. At first, they do not understand, but Blythe convinces them to try and the girls manage to make up. They realize that they were so busy trying to one up each other that they forgot all about Penny's enjoyment.

They ask her to decide on which party theme they do and Penny wishes to have them both featured. Blythe goes on to reveal her surprise of having Vinnie do a dance; but he reveals to everyone that his tail has come back, so he does not want to dance anymore. They are happy for him, but he feels sad in knowing it returned since he was a good dancer before then. Penny is able to cheer him up by pointing out sad she would be if he did not dance. Everyone watches him dance and go on to congratulate him while Pepper and Zoe discuss how the parties managed to work out in the end. They are interrupted when a canon of frosting suddenly goes off on them. It is revealed that Penny was the one who did it, which makes them laugh as the episode ends. 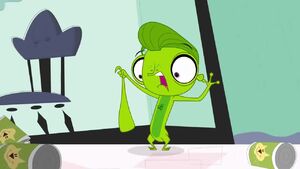