Gailbreak! is the fourth episode of the first season of Littlest Pet Shop.

When Zoe discovers her sister Gail trapped in Largest Ever Pet Shop, it is up Blythe and the pets to bust her out. But first, they will need to get past the Biskit Twins and their high-tech security robot Monban.

Blythe and Zoe are on their way back to Littlest Pet Shop while going over the list of items Blythe had been given earlier. Zoe points out they still did not get her sister Gail's nose cream when they walk by Largest Ever Pet Shop. They walk past it, but just for a second when Zoe notices her sister is inside.

Blythe suggests their must have just been a mix up since Gail was supposed to be dropped off at Littlest Pet Shop. So they go inside to see if they can just get her. Blythe is interrupted by the Biskit Twins and she begs them to let her get Gail, but they do not listen. Instead, they use Monban to send Blythe and Zoe outside, banning her for two weeks from Largest Pet Shop.

Back at Littlest Pet Shop, Blythe complains while Zoe dramatically works herself up, that is, until Minka turns on the radio and her favorite song comes on. This cheers her up while Blythe insists they break in to save Gail. Sunil is a little concerned they will not get back in time to be picked up by their owners, but Russell believes he has a great plan already thought up. They will use Pepper's spray to see where the security lasers are, then have Vinnie swiftly get around the lasers. Penny will take care of Monban and Sunil will use his mind control abilities to hypnotize the twins. Minka will then use her tail to open the door and they can free the pets. Blythe will be outside and she will guide everyone back to the meeting point. Then they just have to get back before their owners show up. While Sunil is still worried, they rush right over to the Littlest Pet Shop.

At the Largest Pet Shop, Russell goes over his checklist before Blythe reveals she could only find a cutesy pink plastic toy pair. Annoyed by this, Russell claims they probably will not need it and he sends Pepper and Vinnie in. While Pepper sprays the area, Vinnie suddenly trips and goes sliding off into the skunk stink. An offended Pepper comments on this before she notices there is not any lasers. She laughs about this before joining the others to inform them they can just walk in. Pepper tries to get Vinnie to snap out of his shock, but by the time he does, Monban shows up and throws them into the cages.

Russell goes over the plan once again and he sends Minka inside to get the pets door open. Minka struggles to find the door when she soon comes to it, only to be intercepted by Monban after the Biskit Twins see her. Minka manages to last a few minutes from the robot, but she soon runs into him when he tricks her and she is thrown inside with Pepper and Vinnie. Russell goes other his next plan, but this one is too confusing and complicated, so Blythe suggests a more simple plan. She walks right inside, but is caught pretty quick, so she tries to outrun Monban while Zoe runs inside afterwards. She runs to the door, but ends up smacking right into it.

While she lays on the ground in a daze, it is then that her most favorite song starts playing. She jumps up and starts dancing and singing with it as passerby's watch this display, until she runs right into Monban as well.

Blythe tries to flee but she gets caught by the twins, yet again and recieves a double ban before being kicked out. Monban comes to the twins, trying to tell them he is out of powers so their forced to plug him back in. Penny uses this moment to sneak in from above. At first, it goes great, but the rope she is tied to proceeds to snag on everything she passes. By the point she reaches the others, Monban has caught up to her and grabs her, tossing her into the cages with the others.

Outside, Blythe has thought up a plan after Russell begins to angrily berate himself for not choosing a different plan he had. She explains it is really up to Sunil. He will have to hypontize the Biskit Twins, then put the toy headset over Monban's robot ears so that she can mimic the twins and make Monban free the pets. With some convincing, Sunil steps inside, only to suddenly freeze up and refuse to move. That is, until Russell mentions something that really sets him off: Snakes!

They try to make Sunil pretend he is surrounded by snakes and this makes him angrily attack everything in sight. A lot of random people see Sunil running around, but they say nothing of it and simply back away. He then manages to quickly hypnotize the twins and throw the headset onto Monban's head. When it's confirmed, Blythe begins to mimic the twins and Monban goes to release the pets. All of the pets run for the hill and flee from the Largest Ever Pet Shop. All except for one cat. The Littlest Pet Shop pets hop on Blythe's scooter and they take off with Gail. Back at the Littlest Pet Shop, Zoe speaks to Gail. However, they discover that it is not Gail at all, but a male dog named Tootsie.

Everyone heads inside while Blythe offers to call Tootsie's owner to inform them he is at Littlest Pet Shop. Inside the shop, someone new starts to speak to them and to everyone's shock, it is Gail. She reveals that this has happened before, before Zoe even says what happened. Instead of anyone responding angrily, Zoe suggests they just dance and have fun as the episode ends.

Tootsie: Will someone give me a ride home?
Blythe: Come on, Tootsie. I'll call your owner.
Tootsie: Uh... did that girl just talk to me? 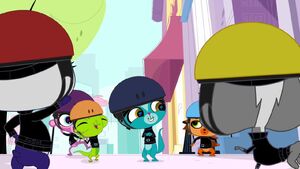