Game of Groans is the sixth episode of the fourth season of Littlest Pet Shop and the eighty-fourth episode overall.

Russell's dream comes true when Blythe takes him, Sunil, and Vinnie to the Renaissance Fair in Downtown City Park. However, he soon discovers trouble is afoot when an old friend informs him of nefarious activity at the fair. 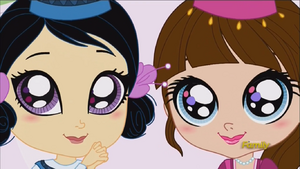 Click here to go on Game of Groans image gallery