"I'm here to pick up a little something something for Genghis. We saw a dreadful exhibit at the city museum that sent him into a tizzy."
—Morgan Payne, Bad Hair Day

Genghis is the poodle of Morgan Payne.

Genghis is friendly, kind, and caring.

Genghis is a small white poodle with light brown eyes.

In Bad Hair Day, his owner took him along to an exhibit at the museum and later, they went to Littlest Pet Shop to get something for him.

In Blythe's Big Idea, he is in the singing crowd of Pet Friendly Skies.

In Secret Cupet, he and Tootsie walk together by Littlest Pet Shop with hearts floating along, implying they had fallen in love. 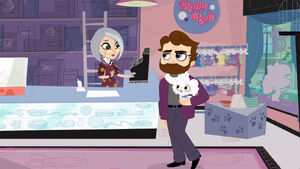