"I'm afraid we're going to be tightening the purse strings for a while, Blythe. I've just been laid off."
—Roger Baxter

Grounded is the eighteenth episode of the second season of Littlest Pet Shop and the fourty-fourth episode overall.

When Roger is temporarily laid off, he takes a job as the Biskit Twins' personal assistant and chauffeur, much to Blythe's dismay. Meanwhile, the DNA test results on two of the pets (Minka and Zoe) temporarily turn the day camp upside down.

"I've lost my dad to the Biskit Twins."
—Blythe

Whittany: (to Roger, after he angrily drives them back home instead of Russia) Just so you know, your song stunk!
Brittany: Oh, and you're, like, FIRED! 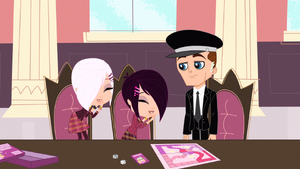