Guilt Tripping is the twelfth episode of the fourth season of Littlest Pet Shop and the ninetieth episode overall.

Blythe is wracked with guilt when her temporary lapse in judgment gets the Biskit Twins suspended from school. Meanwhile, Pepper is on pins and needles awaiting Vinnie's punishment for breaking his lucky rock. 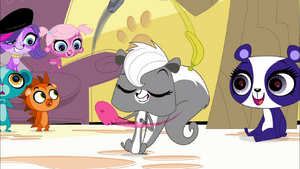