Harold Winston is a groundhog and a one day camper who first appeared in In the Loop.

Harold was dropped off at Littlest Pet Shop by his owner. He is a know-it-all who often does not get his facts right. At first, Russell did not like him very much; however, in the end, the two ended up being friends. He reveals that his facts are inaccurate because he misspeaks due to his vast knowledge. He has a habit taking a breath while sucking in his stomach simultaneously. 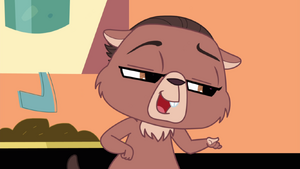