"I am scared of creatures with six or more legs, loud noises, curtains, avocados, and quiet jazz music. But no, not cobras. You will not hurt these raccoons."
—Sunil Nevla

Heart of Parkness is the fourth episode of the second season of Littlest Pet Shop and the thirteenth episode overall.

After Sunil becomes a hero to the raccoons of City Park by facing down an escaped cobra, he must decide whether to stay and be their king or return to his friends at Littlest Pet Shop.

Things are quite unpleasant for Littlest Pet Shop's day campers – it has been raining for three straight days and everyone's going stir crazy. The only one who seems unconcerned about seeing the outside is Sunil, who seems to be a more indoor pet.

Elsewhere, Largest Ever Pet Shop owner Fisher Biskit is having a heart attack – a rare Indian cobra he purchased in the hopes of boosting business has gone missing. Naturally, his daughters are the ones who let the beast loose. Though irate, Fisher is not too worried- having apparently thought "like a cobra" before, he knows there is only one place that beast would want to go – Downtown City Park.

Soon enough, the rain stops. Knowing all too well the current problem with the pets, Blythe decides to take them to the park for a little playtime and fun. Unfortunately, Sunil does not enjoy the outside as his fur ends up poofing up and he generally is unhappy. As bad as things seem, they only grow worse with the coming of a massive wave down the park's river (courtesy of a few dim-witted maintenance workers), which sends Sunil on an unpleasant (and unwanted) trip.

Thankfully, Sunil reaches dry land – alas, his good fortune appears short-lived, as a tribe of raccoons grab him and take him away to an unknown fate. They drop him off at a massive tree, which looks as though a typhoon hit it. The chief of the raccoons is not in the best mood, but Sunil cannot help because the poor mongoose just does not understand him; thankfully, a peculiar pigeon arrives and makes it clear what happened – a vicious cobra attacked and wrecked the place. Almost instantly, Sunil's predatory instincts kick in (and Steve makes an appearance). In a surprising display of physical prowess, Sunil literally ties Steve up in knots and sends him packing. The raccoons thank Sunil and make him their king (as translated by Joey Featherton).

Back with Blythe and the pets, she soon notices Sunil's absence.

Fisher: Once again, you girls are going to be impressed with your father. Largest Ever Pet Shop is going to sell its rarest pet. I finally found a buyer for our Indian water cobra. Whittany? Brittany? Ah. Not many of these cobras are found outside the rivers and forests of northern India, let alone inside a pet shop. [Coughing] Hm? Huh? Cobra? Cobra?! Coooooobraaaaaaa!!
Whittany: Ugh, daddy! Like, keep it down! [Gasp]
Brittany and Whittany: [Scream]
Whittany: Our makeup! Our makeup!
Biskits: Ouuuur maaaaaaakeuuuuuuuuup!

Blythe: Okay, ready to go off leash?
Pets: Yeah!
Penny Ling: Whoo!
Sunil: Ohhh, more frizz! Such an embarrassment!
Blythe: Stay close, everyone!
Sunil: Ugh, I can hear my parents now. "Sunil, your grooming habits are terrible! Don't you ever take a bath?" [Gasp] [Screaming]
(Sunil is swept away by the rushing water.)

Blythe: Okay, let's make sure everyone's here.
Minka: [Screeching]
Blythe: Minka - mm-hmm.
Zoe: Ahhhh!
Blythe: Zoe - yep. Vinnie - uh-huh. Penny Ling - check.
Pepper: [Sniff] Ahhhh! [Sniff] Yeeugh!
Blythe: Pepper - yep. Russell - check. Sunil - huh? What the huh? Where is Sunil? Ah! Okay, Blythe, the worst thing you can do is panic because the pets will panic. So get a grip! Uh, guys? Could I have your attention? Now, I'm going to tell you something and it's very important you don't panic.
Zoe: Blythe, you're being ridiculous. Of course we won't panic. Tell us the problem.
Blythe: All right. Remember, don't panic. [Inhale] Sunil is missing.
Pets: [Panicking] 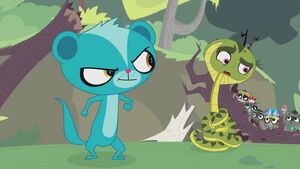 Click here to go on Heart of Parkness image gallery