"I just feel bad. We should spend more time together."
—Roger

Helicopter Dad is the seventeenth episode of the first season of Littlest Pet Shop.

Blythe struggles to handle being with her father all day after he realizes they do not spend enough time together. Meanwhile, Minka tries to befriend a visiting tortoise who refuses to come out of her shell.

Blythe and Roger pull up to the school, where he is quick to begin unintentionally embarrassing her. She comments on this while students who pass by stop to laugh, then as she gets out he informs her that he wont be home until really late because of a flight. Blythe is understanding but he feels remorseful for this. To make him feel better, she tells him they can just set a date for some personal bonding time.

Inside school, Blythe is preparing for her first class when she happens to smell coffee. After she shuts her locker, she sees her father there, but before he can explain why he is there, her friends show up and think Blythe may be in trouble. Roger explains to Blythe that he got someone to cover the flight for him so he is going to spend the entire day with her. While Blythe is excited to see her father, they are forced to go to the nurses office after he accidentally gets a binder ring stuck in his hand.

After the nurse bandages him up, he flirts slightly while Blythe leaves the office. However, the moment he begins to discuss a rash she has, she grabs him and runs out in a hurry.

Meanwhile, at Littlest Pet Shop, Mrs. Twombly is trying to get a tortoise to come out of her shell. She announces her to the other pets, then warns them she is shy before leaving. Everyone is surprised and excited, but they cannot get the turtle to speak to them.

At the principal's office, Roger has managed to get himself and Blythe into trouble. When lunch rolls by, Blythe runs into Josh and Roger happens to notice her strange behavior and wonders if maybe she is not feeling good. He tries to ask Josh about Blythe, but she flees in a fit of nerves.

At the pet shop, Minka is the only one who has not given up on trying to get Olive to come out of her shell. Russell suggests she just gives up, but Minka refuses and claims that just because Olive hides, it does not mean she does not not want a friend. They find this hard to argue with.

At school, it is now gym class. Blythe is trying to play volleyball, but Roger only gets in the way and begins to speak to the Biskit Twins. He tries to encourage them to play, but they refuse and claim a medical condition is keeping them from playing. The coach then decides to stop Roger from playing anymore, after he breaks a light, injures her once again, and gets tangled in the net. He tries to reason with her, but the next class eventually comes along. He gets up to read a poem he dedicated to a young girl he was dating back then. He manages to severely embarrass Blythe, but before he can even read it, the class ends. At the locker, Blythe reveals her feelings to Sue and mentions the other incidents and he comes by to bring her a special hat for art class.

After school ends, Blythe and Roger walk into the pet shop while Mrs. Twombly smells the dog treats she has gotten recently. She asks them how their day went and while Roger enjoyed it, Blythe was less then thrilled. He then asks Mrs. Twombly how her day went and she explains that her sister was having some health problems and she has to deliver some medicine after work. Blythe offers to fill in for her so Mrs. Twombly can leave sooner.

While initially suspicious, Mrs. Twombly agrees and takes off. Blythe tries to escape her father, but it proves futile when he decides to follow her. They find Minka staring at a tortoise shell, which he comments on being reminded of his bike helmet and he takes a picture. Blythe informs him about Olive's antisocial behavior and he suggests they sing a song together. However, the song is really old and Blythe only sung it when she was little. Roger manages to convince her to sing and dance with him, but when she finds out Josh happened to be watching, she instantly freezes up from the shock.

Minka continues to try to play with Olive, who somehow keeps winning the card games they are playing. Minka criticizes Pepper for the way she speaks about Olive. While Penny Ling tries to make her realize it may be useless, Minka makes an announcement to the others.

In the other room, Blythe and Roger begin to clean up together. At this point, Blythe is simply trying to work, but Roger keeps messing things up and she eventually sits down with Minka and Olive. Minka introduces her and claims that even if Olive acts like she wants to be alone, she is sure that is not true. Blythe reveals her true feelings towards Minka, but when she hears her father coming, she grabs Minka and Olive and runs off to hide. But when she sneezes, he finds her and assumes they are playing hide and seek. Minka convinces her to tell him the truth and Blythe admits she is tired of being with him and wants to be alone. However, because she struggles, she accidentally yells and he sadly leaves.

Later on, Zoe is eating while observing Minka and Olive. Minka asks her to back away since she and Olive are now bonding. Zoe leaves, but not before criticizing the situation. Blythe begins to feel bad for the way she behaved, so she goes to apologize to her father. But when she cannot bring herself to do it, Blythe returns to the front of the shop and a man comes in. He announces he came to pick up Olive, when Roger recognizes the man and comes out. They explain to Blythe that Ken was a flight school friend of his and they begin to laugh about old times.

Russell finds Minka hiding underneath a bowl and he asks her what she is doing. Minka explains she thought she could bond closer with Olive when they go to do things later. He then says she cannot make Olive be her friend and she does not seem to want to be either before walking off. Minka tries to make Olive come from her shell to tell him she is her friend, but when she does nothing, Minka announces that she has finally gave up.

Suddenly, an unknown voice begins to speak and Minka finds that Olive has finally come out of her shell!

Roger and Ken are still going over their old memories and Blythe leaves to go and get Olive – whom she finds being rode on by Minka. When Minka announces how they want to spend all of their time together, this makes Blythe cry and take shelter in one of the playing structures.

She explains why she feels so upset and Roger and Ken walk in to find Olive. Blythe points out where Olive is and remains in the playing structure, so Ken walks over to pick up Olive before leaving. Roger then makes an attempt to get into the pet structure with Blythe, who explains that while she thought she wanted to be alone, she realized how she messed up and feels bad. Roger explains he understands why she got so upset, since he was kind of crowding her, but he only did it because they do not get to spend a lot of time together. Blythe claims once again that she is fine with this and is just happy to see him and spend the time with him that she can.

With that said, Roger tries to get out of the structure, but finds himself stuck. While it may be an annoyance, Blythe is happy and they spend the time singing and dancing as the episode ends.

Josh: Uh, excuse me? Sorry to interrupt, but do you sell dog whistles?
Blythe: Uh, dog whistles? I don't think we do.
Josh: 'Kay, thanks anyway. Nice dance, by the way.
Roger: Huh, I guess this tortoise isn't very social. So, what's next?

Roger: What are you doing in here?
Blythe: (sobbing) Being alone.
Roger: Isn't that what you wanted?
Blythe: I-I thought I did. (sniffles) Dad, I'm really sorry I yelled at you and told you to leave me alone.
Roger: It's okay. I guess I was pretty overbearing today. It's just that I feel bad when I'm away so much.
Blythe: And I totally miss you. But we don't have to be together every second to have fun.
Roger: You know what? You're right. Let's get out of here.
Blythe: Okay. 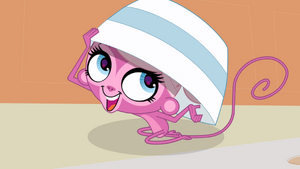