In the Loop is the twenty-fourth episode of the third season of Littlest Pet Shop and the seventy-sixth episode overall.

When an obnoxious groundhog named Harold arrives at the day camp, Russell cannot wait for the day to end, but is horrified to discover it never really does.

This episode became available to purchase by iTunes on February 23, 2015 5 days before its television air date.

Main article: In the Loop/Transcript

"The finest bamboo is from Indiana."
—Harold
"Adding an underwater elephant step is sure to improve your timing."
—Harold 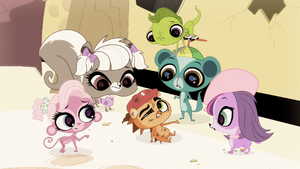 Click here to go on In the Loop image gallery