Inside Job is the nineteenth episode of the second season of Littlest Pet Shop and the forty-fifth episode overall.

Blythe, intent on bringing back the school's former and superior bottled water, runs for class president against the Biskits while the pets suffer escalating annoyance from a mysterious droning buzz emanating from somewhere in the shop.

Before this episode aired in the United States, it aired on United Kingdom on February 25, 2014. 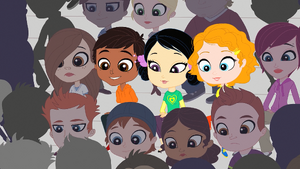 Click here to go on Inside Job image gallery