It's the Pet Fest! - Part 2 is the twenty-sixth episode of the third season of Littlest Pet Shop and the seventy-eighth episode overall.

When the outdoor venue for the Pet Fest venue falls through, Blythe only has mere hours to relocate the entire event and Zoe worries about impressing her new friend Heidi.

This episode became available to purchase by iTunes on March 2, 2015, 4 days before its television air date. 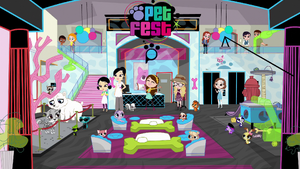 Click here to go on It's the Pet Fest! - Part 2 image gallery