Jebbie is a ferret who only appeared in Tongue Tied. In some merchandise, her name is given as Jebbie Cho.

Jebbie speaks Korean almost exclusively (and a small bit of English). She lost her owner at the Downtown City Airport, so she came to Blythe for help, but Blythe could not understand her; likewise, Minka and her poor translation skills had her under the impression that Jebbie was from somewhere in Iceland. Blythe asked her many questions, but none were right. Blythe got Youngmee to translate her language and found out she lost her owner. Blythe and Minka managed to get her to the airport and reunite her with her owner.

Upon the Franchise Re-Invention, before Jebbie had debuted, a ferret toy with a similar coloration to Jebbie was released, named Farrah May. 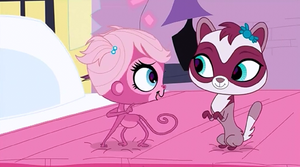