""A lot of a lot?" What is that, some kinda new slang? You kids and your cool words. WOULD IT HURT YOU TO USE THE ENGLISH LANGUAGE PROPERLY?!"
—Jerry

Jerry Ferguson is Russell's father. He only appeared in Senior Day.

Jerry is shown to be very demanding, bossy, condescending, selfish, short-tempered, and rude. He is easily irritated by use of slang. He constantly follows Russell around everywhere he goes.

When Russell reaches his breaking point, Jerry softens up, showing a pleasant side. 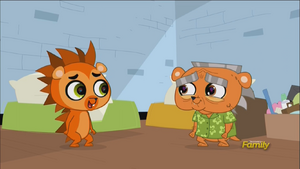