Just Not Into It

Just Not Into It is the ninth Littlest Pet Shop animated short, published by the Hasbro Studios Shorts YouTube channel on October 3, 2014.

The short begins with a yellow balloon floating in the air of Littlest Pet Shop. It soon becomes very evident that Sunil, Russell, and Vinnie are playing with it, trying their best to make sure the balloon does not touch the ground.

The boys are fully concentrated on their game; so when Blythe comes in to ask them if they want to try some new outfits for the International Pet Fashion Expo, they say that they don't have time for that as they are caught up in the game.

One word leads to another, and soon they start the topic of clothes being a girl thing, saying that the boys "look good au natural."

After that, Russell, Sunil, and Vinnie start singing a song about how much they are not into trying the different outfits due to being "macho guys."

Ironically, the more the boys sing their song about not being interested in clothes, the more attention they pay on their outfits and appearance, getting more into it. During the entire song they keep playing with their balloon, no matter what they do or where they appear to be in their musical fantasy. After the song ends, and each of them has tried at least 3 outfits on, the balloon lands on Russell's feathered hat and bursts. To lighten up the mood, Blythe gives the boys some more outfits to try on, which they grab out of her hands, eagerly accepting the offer. 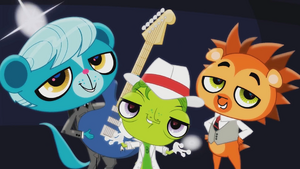 Click here to go on Just Not Into It image gallery