LPS: The Moosical is the twenty three episode of the fourth season of Littlest Pet Shop and the one hundred and first episode overall.

It is a musical disaster when Blythe and the pets try to calm a nervous moose whose incessant bellowing threaten to spoil Mrs. Twombly's big singing quartet reunion. 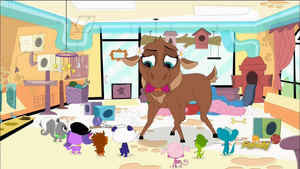 Click here to go on LPS: The Moosical image gallery