It is a parody of Life of Pi, featuring Sunil as the only pet from the main cast.

The story begins in the ocean, with Sunil writing a message reporting that he has been floating in the lifeboat for many days and is hungry. With a request for food, he puts it inside a bottle and throws it at the sea. But the bottle is immediately eaten by a large shark.

Sunil then remembers he is a magician and decides to use magic to conjure up some food. He draws his magic wand magically on his hand, wiggled it while saying some magic words and successfully conjures a plate with a piece of pistachio upside-down cake, his favorite. Suddenly, Steve comes out of Sunil's cover, on the boat's nose, coiling around the cake and states it is his favorite, too. Steve pounces at Sunil, making the mongoose retreat in fright and accidentally throw his wand to the sea, at the shark's disposal.

Outraged, Sunil commands the cobra to step away from the cake, and the two prepare for a fight. They start by circling around each other at the lifeboat's borders, then both jump to the heights and battle in midair. Sunil palm attacked him on the face that make Steve's body stretch, then Sunil grabbed his body then dragged himself to Steve and kicked him on the face. Steve got stunned while spinning on the air, but after he recovered; he grabbed Sunil with his tail and squeezed him and spin him like a top. Then Sunil got stunned and then recovered and pulled Steve's tail to him, and stretched Steve's body to a zigzag. Then Steve turned Sunil into a paddle ball using his body, then Sunil pulled Steve's hood, then Steve whipped Sunil on the butt, Sunil got shocked and shouted in pain. And finally, while still on the air, Sunil pounded Steve using his rear back to the boat.

The cake is still there and Steve saw and grabbed it after he got recovered. Then Sunil falls back on the boat and saw it, and approached Steve to steal the cake on his tail. The two start to steal the cake against each other, but the two loosen the cake on the plate from their hand and fly on the sea.

Now Sunil is starring on the floating cake on the sea while getting nervous that the cake might ate by the shark; then as he expected, the shark ate it. Sunil became shocked and jump off the boat and fearlessly rushed to the shark. He pulled the shark's nose to open its mouth and then entered its mouth and grabbed the cake inside it. With all his force, Sunil is trying to stop the shark from closing his mouth while holding the cake and to stop it from getting him eaten.

At the end, it is revealed to be Sunil's fantasy. Sunil awoke from the shark fantasy and Blythe and him were just in a bathroom giving Sunil a bath; and the cake was just a squeaky toy and the short ends after he squeaked it. 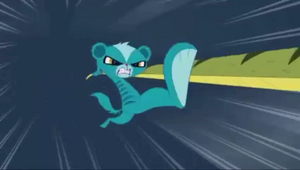 Click here to go on Life of Cake image gallery