Lights, Camera, Mongoose! is the thirteenth episode of the first season of Littlest Pet Shop.

Famous movie star mongoose Shahrukh is in town shooting his next film and the pets go on set to visit their favorite star. However, when Sunil is mistaken for Shahrukh, he is in for the ride of his life.

A peaceful day in a town is interrupted by a white tiger that suddenly appears. It roars and growls at anyone crossing its path until it is scared everyone away, including a man guarding a cage with baby tigers in it. As she gets closer, a man suddenly jumps out with an object with plans to knock her out with it and add her to the cage with her children.

Suddenly, a mysterious figure appears. He knocks the man down but the dart inside of it is sent rocketing to the sky while he grabs the cage keys and releases the tigers. Upon remembering the dart the mongoose quickly grabs it just in time to avoid hitting the mother tiger. As the man sneaks up to try again, he uses both darts and throws them right back, getting the man on the tongue and knocking him out!

Together, he and the tiger family walk off into the sunset.

Meanwhile, the pets cheer as the movie ends and comment on how much they liked it. Except for Vinnie, who did not enjoy it and claims he does not like Shahrukh, which ends after Minka throws the bowl of popcorn on his head and they begin to yell at him. It is then Sunil comes by with a new perfected trick to demonstrate. The other pets are annoyed by the fact he shut their movie off, but also because they are simply tired of seeing his tricks. But he promises that this one is a good one and picks Penny as his assistant and begins to dance around and make all sorts of sounds until revealing a small cherry bomb-like object and throws it down, making two puffs of sparkling smoke appear.

Suddenly he reappears in Penny's place, but they cannot find Penny – until she runs in through the entrance door and returns, much to Sunil's excitement. Penny begins to inform everyone of the movie being filmed down the street staring Shahrukh and everyone (except Sunil and Vinnie) excitedly talk about it. Sunil tries to catch attention by bringing up how good he did, and that he must be a good magician. But no one wants to hear it and they try to think of how they can see Shahrukh. Sunil offers to use his magic, but they quickly shoot it down and decide to ask Blythe to bring them over.

And so, using her scooter Blythe transports everyone over to the movie set and asks how Penny found out about it. As Sunil tries to explain it was his magic, Pepper points out that he does not know how he did it. Though Sunil claims he does, he just cannot tell her since it is against the magicians code. They approach a security guard who refuses to let them come any further. They have no idea how they could possibly get inside and Sunil offers to use his magic, once again resulting in being yelled at.

It is then Shahrukh leaves his trailer. Everyone (including Vinnie, but not Blythe or Sunil) begin to go nuts over realizing it really is him. Shahrukh approaches them and as Sunil doesn't do anything, he can't help but notice something familiar about him. Blythe tries to explain that they look a lot alike, but neither believes it. He's then chased off by a group of girls as Blythe notices the time and realizes she has a class to get to, so she drops the pets off at the shop and takes off. Unknown to them Shahrukh has snuck with them!

As he greets them, he quickly explains he came to get away from his famous, popular life. He's tired of it and really just wants a break. Sunil tries to point out that he should be happy he isn't constantly ignored and appreciated by everyone but Shahrukh just tells him he should try to be him for a day and see how it goes. But before they can speak anymore of it, the others yank Shahrukh back inside the pet shop.

Sunil decides he will try to be Shahrukh and makes his way back. As he walks back to the movie lot, he complains about how his friends never pay him any attention and that he's better off without them when Shahrukh's manager shows up and grabs him.

Back at the pet shop everyone asks Shahrukh what it is like to be famous. Which he chooses to describe in song, then complains of being tired after it ends.

Back at the movie set, Sunil is enjoying every second of the grooming the staff is going through. They notice how strange it is seeing him so perky and cheery when he suddenly presents a bouquet of flowers and gives them to the woman who was grooming him. She is very surprised but happens to adore the gift and calls his magic a talent, but suddenly his manager yanks him back outside to the set. A wind machine is turned on but Sunil simply stands there as he has no idea what he is supposed to do.

At the pet shop, everyone is waiting hand and foot on Shahrukh and growing tired of it. It is then Blythe comes in asking what they think of her ice sculpture when she sees Shahrukh and asks why their waiting hand and paw, on Sunil. Vinnie quickly explains to her and Blythe points out how bad the situation is and takes off. She happens to see Penny, who claims she came to avoid rubbing Shahrukh's feet.

As they wonder how they can find Sunil, Blythe hopes it will be easy and they try to speak to the guard. However he misunderstands her and sends her right off. After Blythe tells Penny they need to get the walkie-talkie, Penny goes into attack mode and quickly tosses it in Blythe's direction and takes off running so that the guard has to chase her.

Back at the Pet Shop, the group is trying to think of how they could rid of Shahrukh seeing as he's too bossy and rude for them to want to be around him any longer. Russell points out that since he likes to be comfortable, they just have to make him really uncomfortable and cross the bounds a little, to make him want to leave. And so, they start by making Zoe sing at him, Pepper squirts water in his face, Vinnie annoys him with his dancing, and Minka throws paint all over him.

Shahrukh tells then off before he runs for cover and tries to find a place to hide until he can escape.

Meanwhile, Sunil is being prepared for a bungee jump but he's beyond terrified and begins to yell the moment the director leaves. He hears Blythe on the walkie-talkie and calls for help, but Blythe informs him that they can't get past the security guard so he's on his own. They manage to convince him to use his magic, but after the director yells at him Sunil falls over the edge!

While falling he manages to say what he has to in order to perform his switcheroo trick, switching places with Shahrukh. Blythe and Penny happen to overhear this and quickly head back to the pet shop while Sunil reappears inside the pet shop building. Everyone happily comments on how much of a good magician he is and they comment that they should have been more appreciative of him and his talents, so they decide to let him practice his magic anytime he wants to!

When Sunil suddenly brings up that he needs an assistant for a brand new trick involving a box and a saw, everyone takes off.

Vinnie: You only half did it, David Copperfail. 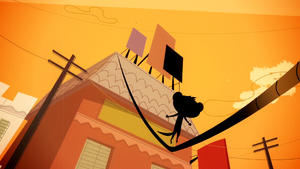