Ling Pen is a panda bear that lives in Shanghai, China. He is the cousin of Penny Ling and the brother of Jun Ling and Ling Jun. He only appeared in Shanghai Hi-Jinks.

Along with his sisters, he likes American musicals and, for the first part of the series, thought Penny Ling's life was just about dancing and singing in the rain (a reference to "Singin' in the Rain").

Ling Pen is a white panda bear with bright cyan eyes. His ears are a deep grey-indigo color while his tail, legs, arms, and eye markings are a dull shade of blue. 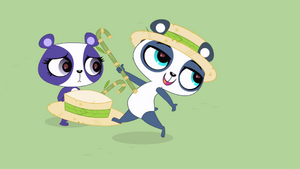