On a rainy day, Russell gets annoyed by Zoe squeaking on her mouse toy, Zoe gets annoyed by Sunil tapping his wand on his hat, and Sunil is annoyed with Minka swinging back and fourth on the tire swing while she's painting.

Russell, Zoe, and Sunil start to sing their complaints to each other. Minka, who is not annoyed by anything, tries to convince them not to fight. Soon, the argument gets them to say silly things to each other. Sunil decides to go outside, but then Russell and Zoe decide to as well and they start to argue who leaves first.

Meanwhile, Minka quickly paints a picture of the three of them as best friends. Minka stops them from arguing and shows them the painting. Russell, Zoe, and Sunil realize that though they do things that annoy each other sometimes, they should not let that stop them from being friends and there is really nothing to complain about. They make up as the rain stops and the sun starts to shine. Zoe, Russell, Sunil, and Minka all dance in the puddles and sing some happy verses and Russell throws chew toys to all of them. 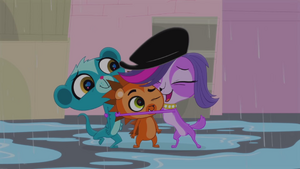