Littlest Pet Street Part - 1 is the twenty-fifth episode of the fourth season of Littlest Pet Shop and the one hundred and third episode overall.

Blythe is able to get viral video star Feline Meow to appear at Littlest Pet Street's Grand Opening. However, she and the pets have to fly to her island home to pick her up for her appearance. 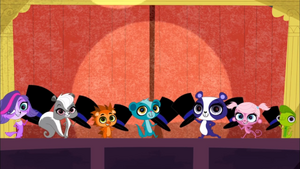